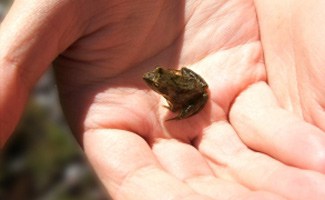 There are more species of animal living on the face of our planet than we will perhaps ever know about, but a recent discovery adds one more creature to the list of discovered species. In this article we will cover the newly discovered smallest frog in the world – the Paedophryne amanuensis, found in New Guinea measuring just .27 inches long. 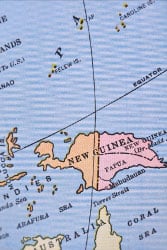 The discovery of Paedophryne amanuensis was actually something of an accidental find as the team was attempting to record calls of native frogs to the Papua, New Guinea forests. As the loud forests echoed with frog calls there was one call in particular that piqued the curiosity of the team. Investigation of the sounds proved a little more difficult than expected and it was not until researchers simply took handfuls of leaf litter and placed them in a plastic bag that they caught sight of the .27 inch long frogs. The Paedophryne amanuensis is a relatively new species discovery and as such scientists are still learning about these small frogs.

Paedophryne Amauensis Hide in Leaf Litter on the Forest Floors

Researchers so far know that Paedophryne amanuensis prefers to live in thick leaf litter on the forest floors in the eastern forests of Papua, New Guinea. Being such small creatures with dark camouflage the Paedophryne amanuensis are able to hide in the deeper litter and escape not only predators but also researchers! Small frog species like the Paedophryne amanuensis are not unknown to small forests around the world. Damp leaf litter and tropical climates with high levels of moisture and abundant insect populations make the ideal setting for smaller frog species who would stand no chance in less sheltered environments.

There are Many Unique Factors about the Paedophryne Amanuensis

The Paedophryne amanuensis is unique in comparison to many other frog species, in that it does not have a tadpole stage in its lifecycle. Rather than hatching as tadpoles as most frogs do, the young Paedophryne amanuensis hatch as small hopping frogs that are already completely formed. Incredibly even right after hatching, these amazing frogs can jump as much as thirty times their body length. The Paedophryne amanuensis feeds on small invertebrates that can be found on the forest floors. Another unique feature about this small frog species is the incredibly high pitched sounds that these frogs make when calling for mates. The 8400 – 9400 Hz sound that these frogs make is similar to the sound of insects and is what drew researchers to the frog initially. When hearing the peeps of these small crepuscular frogs researchers were curious to pinpoint the sound and it was then that these tiny frogs were discovered.

Microhylid frogs are frogs that fall in to the Microhylidae family. This frog family is the largest of all frog families and contains some 495 different species that are found all over the world. Most commonly these frogs are found in warm temperate or tropical regions of the world including: North and South America, eastern India, Sri Lanka, New Guinea, Australia, Madagascar and Africa. Each species within the Microhylidae family are known for being incredibly small and can be found living on forest floors, in underground burrows and in trees. There are nine known subfamilies of the Microhylidae frog family, these include Asterophryinae, Brevicipitinae, Cophylinae, Dyscophinae, Genyophryninae, Melanobatrachinae, Microhylinae, Phrynomerinae and Scaphiophryninae. 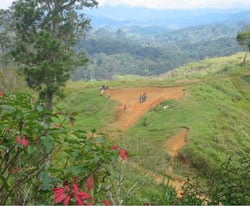 Many people find themselves asking why this species was found in Papua, New Guinea and there are a couple of answers to that question. Obviously the first answer is that the environment – meaning the temperatures, humidity levels, amount of food available etc – is conducive to this particular frog population. Perhaps what people are more interested in, however, is why this unknown species was found here in the first place. Much of the incredible land of Papua, New Guinea has yet to be explored or developed and as such species remain untouched by human hands. Without the deforestation and other interruptions that humans cause to natural environments, a number of amazing species that have yet to be discovered are able to thrive in this area. In addition to Papua, New Guinea, the forests of Madagascar also remain a treasure trove of unchartered territory and unknown species.