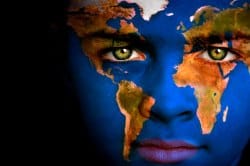 A climate refugee is someone who has been displaced geographically as a result of climate change. In other words, they were unable to stay in their homes due to an impending change in the surrounding climate – be that from fire, storm, flooding, earthquake, etc. that caused them to move from their homes.

As a result of this forced movement of people from their homelands due to natural disasters, mass global migrations ensue, which result in border conflicts and political instability. How real is the problem of climate refugees? Consider this – the Pentagon now considers climate change a national security risk.

Aren’t Climate Refugees a Problem of the Future?

How Many Climate Refugees Exist Today?

The United Nations estimates that 25 million climate refugees exist today. That number is expected to double to 50 million within the next five years. That’s less time than it takes your kid to get through elementary school! It gets worse – estimates from the Red Cross, IPCC, The Christian Monitor and other organizations estimate that up to 1 billion people will be displaced due to climate change within the next 4 decades. For many of us, that’s within our lifetimes.

If you haven’t already, check out the movie Climate Refugees. It will give you the lowdown on climate refugees in a format that brings home the seriousness of this issue.

To me, this is the first “climate” movie that brought full circle the direct impact climate change is having, and will have, on our lives. It documents not only the millions that have been displaced as a result of climate change, but the effect this will have on the lives of each and every one of us if we don’t step in and make changes – fast.

You might think you’re safe in the middle of the U.S. on top of a mountain. You’re thinking “floods can’t reach me here,” and “I’ve got plenty of food.” That may be true now, but the fact of the matter is that climate change will impact most of us indirectly – by way of climate refugees. Floods in the South Pacific on rice and grain fields will impact our food supplies directly; clean water supplies will become scarce, etc.

The mass migration of refugees in and out of the country will not only cause political instability but will threaten our nation’s national security. And the threat comes not only from outside the Untied States, but from within as well. Just look at the impact Hurricane Katrina has had on our nation to this day.

The impacts of Hurricane Katrina on New Orleans are felt to this day. In the aftermath directly following the flooding of 80% of New Orleans in 2005, looting, violence, and other criminal activities became serious problems. The robberies covered everything from retail outlets and small businesses to basic food and grocery stores. To this day, people are suffering from health effects (particularly mental health), and are unable to return to their homes in many cases. Why? Insurance companies will no longer insure the houses, so real estate options have become limited.

More Natural Disasters on the Way

The fact is, there will be more natural disasters, a lot more devastating than Katrina. Just this past week, we had the New Mexico Oil Spill, with an offshore BP drilling outfit exploding and leaking millions of gallons of oil into the water. The oil is spreading, and this will potentially be the largest and most devastating oil spill of all time. This comes just around a time when climate legislation was hanging in the balance.

Whether or Not You Believe in Climate Change…

There’s always two sides of an argument. In the case of climate change, or global warming, there’s the prevalent argument that the climate changes are cyclical, or that the globe is cooling just as much as it is warming. That’s fine – believe what you will. Whatever the cause of climate change, be it natural cycles or man-made effects, the fact is that climate change is creating climate refugees. And it’s doing so on a scale that will endanger not only future generations well-being, but our own well-being, and that of all of humanity, in the very near future.