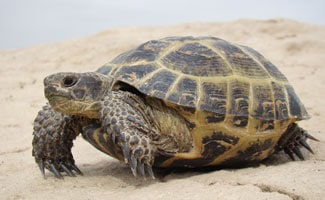 When it comes to keeping a pet tortoise very few people know that there are numerous tortoise species.

One of the most popular species of tortoise is the Russian tortoise a small tortoise species that when cared for properly often outlives its owner. In this article we will cover everything you ever wanted to know about the Russian tortoise including: physiological characteristics, natural distribution, life in captivity, diet and appropriate methods of care.

What Is The Russian Tortoise?

The order Testudines is an order within the reptile class and is most commonly recognized as being “turtles.” Testudines are distinguished by their shell that is composed of either cartilage or bone and is actually an extension of the animal’s ribs. The shell acts like armor and protects the Testudine from predators that would otherwise be able to quickly kill the soft bodied reptiles.

Referring to Testudines as turtles can cause confusion since there is a difference between the taxon turtle, tortoise and terrapin. For this reason most biologists prefer to use the scientific term “Testudines.”  Testudines are one of the oldest of all of the reptile orders and have been dated back to as long ago as 215 million years ago.

All Testudines, in addition to being considered cold blooded are also recognized by their need to breathe air and lay their eggs out of the water (while tortoises do not live in the water, other Testudine taxon such as turtles and terrapins do.)

The suborder Cryptodira is a suborder of the Testudines order and incorporates the majority of living turtles and tortoises. Not all turtles can be included in the Cryptodira suborder since the Pleurodira or turtles with side necks; do not possess the physical characteristics of the Cryptodira. Cryptodira is characterized as having the ability to pull their heads straight back in to their shell in addition to being able to lower their necks to do so. Side necked turtles are not able to lower their necks in this manner. A number of species fall within the suborder Cryptodira including tortoises, sea turtles, freshwater turtles, soft shelled turtles and snapping turtles.

The beginning of the Cryptodira suborder was seen in the Jurassic period when aquatic species became widespread and terrestrial species began to take hold. A number of Cryptodira species are no longer in existence but there are currently three recognized living super families:  Trionychoidea, Testudinoidea and Chelonioidea. The Russian tortoise is a member of the super family Testudinoidea which also incorporates pond turtles. The super family Chelonioidea includes sea turtles. The Trionychoidea is made up of soft-shell turtles and similar species.

Whether or not the Russian tortoise is considered to be a member of the Testudo genus is disputed; however, for the purpose of this article we will operate under the assumption that this classification is accurate. The Testudo genus is a genus of tortoises that are specifically found within Europe, Western Asia and North Africa. All species within the Testudo genus are herbivores.

The Physical Characteristics Of The Russian Tortoise

Another distinguishing characteristic that can be seen between the two sexes of the Russian tortoise is the length of the tail; the male has a longer tail that usually sits to one side rather than straight out behind. Female Russian tortoises can be distinguished by the presence of flared scutes on their shells that are completely missing on males.

Not everything about the two genders of this species differs, both the male and female have similar coloration which varies but is generally brownish black in color with lighter patches of yellow between the scutes of the shell. Underneath the shell the body of the Russian tortoise is bright yellow and brown in color.

The Diet Of The Russian Tortoise

Unfortunately for aspiring tortoise owners this type of diet is not readily available on a consistent basis and as such captive tortoises are often fed commercial foods that do not allow for optimal health. Without the adequate vitamins and minerals from their diet, the Russian tortoise can succumb to improper diet and may experience stunted growth and general sickness from an improper diet.

It is also important to note that captive Russian tortoises should not simply be fed any plant material since a number of plants can expose the tortoise to toxins that can quickly build up and become deadly. Some of the most common toxins that the captive Russian tortoise can be exposed to through an improper diet include: tannins, goitrogens, oxalic acid, purines and phytic acid.

What To Feed The Captive Russian Tortoise

One of the most considerable challenges for the owner of a Russian tortoise can be providing a varied diet that can keep their tortoise healthy without exposing them to toxins. One of the most important aspects of the Russian tortoise diet is greens, these can be purchased from any grocery store and can include: endive, romaine lettuce, radicchio, mustard greens, spring mix, turnip greens, kale, collards and chicory.

Captive Russian tortoises also enjoy hay incorporated in to their diet, hay should be chopped finely and can be mixed in to a variety of greens in order to feed larger volumes for a tortoise that is kept outdoors and follows a natural hibernation schedule of the tortoise in the wild.

Treats For The Captive Russian Tortoise

Hay and a variety of greens form the basis for any Russian tortoise diet and provide a good variation of nutrients provided that greens are changed up frequently. Like most creatures however, the Russian tortoise does appreciate a little something different once in a while.

What To Avoid Feeding A Captive Russian Tortoise

Many of the food items listed in this category can cause health problems that are difficult to treat and can be fatal to the tortoise so it is important that they are avoided. Foods that should be avoided include: fruits, dog food, cat food, meat, iceberg lettuce, bread, pasta, bok choy and pellet foods.

The word anti-nutrient may seem confusing but it actually refers to foods that contain chemicals that can build up over time and prevent or change the tortoise’s ability to absorb nutrients from its diet. A build up of any one of these anti-nutrients can be fatal.

Oxalic Acid: Oxalic acid can be found in a number of greens that you may be tempted to feed to your tortoise. Oxalic acid gives a bitter taste to these greens and can be found in rhubarb and beet greens in addition to mustard greens and spinach. While this element is found in mustard greens and spinach these elements still provide a good amount of nutrition and should be fed in moderation rather than eliminated. It is important when feeding these two types of greens that the tortoise receives adequate hydration in order to process the small amounts of oxalic acid present in these greens. Without adequate water intake even a small amount of these greens can result in kidney stones or kidney damage.

Goitrogens: Goitrogens are elements that are noted for enlarging thyroid glands and causing goiters that alter the tortoise’s ability to take in iodine. Goitrogens can be found in a number of cruciferous plants including kale and mustard greens. There is some debate as to whether these greens should be avoided all together or whether they should be fed in moderation but the general consensus seems to indicate no ill effects from a limited intake of these plants.

Providing Water For The Russian Tortoise

Naturally, due to the environment in which the Russian tortoise is naturally found, the Russian tortoise is programmed not to waste water and when no ready source of water is made available this reptile will not release urates from the bladder. If a ready source of water is deprived for a long period of time the tortoise can experience a deadly build up of urates so it is crucial to provide fresh water on a regular basis.

Owners of Russian tortoises that keep their pets inside their homes sometimes question why their tortoise is active year round since in the wild these reptiles hibernate.

The fact is that Russian tortoises in the wild experience both hibernation and aestivation as a result of the climate and environmental conditions that surround them. When a tortoise is kept indoors there is a lack of these triggering factors and so the tortoise is active year round instead.

For the wild Russian tortoise hibernation occurs from October through to mid-March when temperatures become too cold. This lengthy hibernation period means that the Russian tortoise is only active during a few months in the year and when they are active they feed in massive amounts in order to store up enough nutrients to last through hibernation.

Aestivation is something of a summertime hibernation that the Russian tortoise experiences when temperatures become too hot for the tortoise to feel comfortable. Temperature increase is not the only factor that can trigger aestivation, in fact a lack of food sources and a lack of water availability can also cause the tortoise to aestivate. When it aestivates, the Russian tortoise retreats to its burrow under the ground and stays there where it is much cooler and the tortoise is more able to maintain its body temperature. With lower temperatures and higher levels of humidity the tortoise is able to maintain hydration levels and reduced activity levels means a reduced need for nutrients.

One question that remains unanswered for some is: do Russian tortoises make good pets? In general the Russian tortoise has the ability to be an amazing and rewarding pet for the right person; however, for the wrong person this reptile can be boring, troublesome and have too long of a lifespan. If you are considering bringing a Russian tortoise in to your home it is important first to consider all of the information provided above on how to properly care for these creatures. It is crucial to understand the unique needs of these creatures in order to provide them a humane life and in turn be rewarded with a healthy and happy pet tortoise. Keeping a Russian tortoise happy and healthy includes all of the things that any other pet requires from their owner, veterinary checkups, a varied and healthy diet, regular cleaning of their habitat, bathing and grooming, daily feeding and watering, exercise and entertainment and finally an understanding of how to keep this creature happy.

Unlike many other pets however, the Russian tortoise can live for an average of seventy five years, a life span that is much longer than most people have remaining when they can responsibly care for a pet tortoise. It is important to understand the lengthy lifespan of this tortoise and to ensure that you are not only able to provide a healthy life for it but that you are able to plan for a healthy life for it even after you are no longer around. Taking on a Russian tortoise as a pet is a significant en-devour.

Video of a Russian Tortoise In Action

Do you have a Russian Tortoise as a pet?