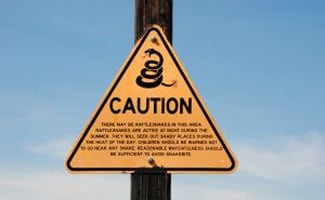 When it comes to poisonous snakes there are a number of these serpents that can be found in the United States. Residents in one of the United States most southern states, Florida, can certainly attest to this fact with more than a handful of the most venomous snakes making their home in the panhandle! In this article we will cover some of Florida’s most venomous snakes including: the southern copperhead, the cottonmouth, the eastern diamondback and the timber rattlesnake.

The Eastern diamondback is also commonly recognized as an Eastern diamondback rattlesnake, a rattlesnake or a rattler. The Eastern diamondback grows to anywhere from 36 to 72 inches long and has a heavy body marked with brown centered diamonds that run down its back. The borders of these characteristic diamonds are cream in color and the basic body color is brown. As with all rattlesnakes, the tail of this snake ends in a rattle unless the specific individual snake was born without a rattle or lost its rattle somehow. The pupil of the Eastern diamondback is vertical and catlike and this snake has a deep pit that runs between the nostril and eye. These poisonous snakes can be found throughout Florida in addition to being found northward in to North Carolina, westward in to Mississippi and eastern Louisiana. These snakes prefer to live in wooded areas but are often found in areas inhabited by humans. This venomous snake will not always rattle before biting and when it does bite the bite can be particularly dangerous if it does not receive immediate medical attention.

The timber rattlesnake is also recognized as the canebreak rattlesnake. This poisonous snake grows to anywhere from 36 to 60 inches long and is a heavy bodied snake. The timber rattlesnake is characterized by the presence of a red brown stripe that runs down the center of the snakes back and is crossed by large black cross bands. The base body color of this snake can be described as pinkish grey or tan. The tail of this snake is completely black and tipped with a rattle unless the snake was born without a rattle or lost its rattle at some point. The timber rattlesnake can sometimes have a dark diagonal line that passes through or just behind the eye in addition to a pit between the nostril and eye. This particular breed of rattlesnake is found in only a few select areas of Florida, just nine counties in northern Florida. The southernmost range of this rattlesnake is Volusia County and the western most range is Hamilton and Suwannee counties. This snake can also range as far north as southern Maine and as far west as central Texas and southeastern Minnesota! These snakes prefer to live in low bottomlands that are damp and support small wildlife. As with any poisonous snake, someone who is bitten by the timber rattlesnake should seek immediate medical care to avoid any complications from being bitten.

When it comes to poisonous snakes in Florida it is most important to tread with caution. The majority of these venomous snakes will only attack humans when they feel cornered or threatened and so watching where you tread will help to avoid any dangerous snake encounters. If you do happen to run in to any of these snakes, or, in fact any snake at all, it is always best to walk away. If you find a snake in your home and are unsure as to the species it is best to call a professional to help with removal of the snake in order to avoid being bitten. If you are bitten by a snake you should always note the description of the snake if it cannot be caught and visit your local health professional to assess a course of treatment to avoid long term injury or even death.