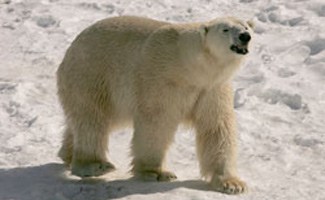 Polar bears are one of the world’s most recognizable species and regardless of the range of the polar bear’s natural habitat these great white beasts inhabit most countries of the world in zoo showcases. Still, even though these huge bears are spotted throughout the world in the safety of zoo habitats they are a species that are particularly vulnerable to extinction. Wildlife rescue organizations have dedicated resources to saving the vulnerable polar bear; however, the great white beast is not only suffering from factors that are under the control of man but it is also suffering from changes in climate that are devastating its natural habitat.

The polar bear lives throughout the Arctic circle and is known as the largest land carnivore in the world. This largest of bear species can weigh in between 770 to 1,500 pounds although generally this weight range applies to the male of the species with the females weighing in at between 330 to 550 pounds (although a pregnant female can weigh up to 1,100 pounds). Male polar bears measure around 8 to 9 feet long and female’s measure in at between 6.5 and 8.5 feet long. These weights and measurements are, of course, an average for the species and the largest polar bear on record smashed these numbers and weighed in at over 2,000 pounds and measured some 12 feet long! Polar bears are particularly stocky in shape but compared to other bear species they have longer bodies as well as longer necks. 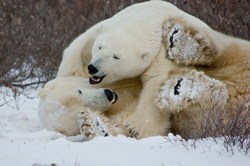 For the most part the polar bears diet consists of seals, both ringed and bearded seals but they also catch and consume other seals common to their location and they are also scavengers. Life in the frozen Arctic teaches these incredibly large carnivores not to pass up a meal even if they aren’t the ones that killed it. Scavenged prey includes beached whales, dead and rotting walruses and the remains of something else’s kill. Polar bears are not too picky when it comes to food because these humongous beasts must maintain their large body masses in an environment that is particularly harsh when it comes to food resources. In order to survive a polar bears body demands at least 4.4 pounds of fat which isn’t hard to come by in the blubber covered animals of the Arctic circle, assuming that the polar bear is able to catch at least one of these mid-sized blubber covered seals once a week, more so if there are small mouths to feed as well.

Polar bears utilize a variety of methods of catching their prey including still hunting, land stalking, aquatic stalking, and lair stalking; each of these methods utilizes various skills of the polar bear and yields a variety of outcomes. Still hunting is a method of hunting that polar bears most commonly utilize, this involves waiting for prey by the edge of the ice or at the side of holes in the ice so that when their prey comes up for air the polar bear can drag them up on to the ice and kill them. Land stalking is a more commonly utilized method when the polar bear’s prey is isolated on land. The polar bear will find its prey and stalk it slowly until it sees the opportunity to snatch its prey when it will charge quickly in order to kill the prey before it escapes. Aquatic stalking is a similar method to land stalking however the polar bear remains in the water and pops up quickly to snatch its prey from the edge of the ice. Finally lair stalking is a method that the polar bear utilizes during birthing season when their prey come to land to build lairs in which to give birth to their young. Polar bears are rather adept at identifying these lairs and after it has identified one of the underground lairs it will stand above it and utilize a stamping motion with its front paws to smash through the ice in order to get to the young prey underneath.

Once a polar bear has caught its prey death is usually quick as the bear tends to attack the head or neck of prey with its large jaws or sharp claws. After killing its prey a polar bear will usually move its prey from the place of attack and first consume the skin and fat. The fat from its prey is one of the most important aspects in regards to nutrition for the polar bear. Following consumption of the skin and fat the polar bear will then consume the meat. Polar bears do not always finish their meals and frequently leave behind “left over’s” for other creatures and birds to feast upon. “Left over’s” are generally not seen when a mother is accompanied by her cubs.

Polar bears generally breed in the early spring and cubs are usually born in the mid of winter. Polar bears gestate for approximately eight months after successful breeding. During breeding season there is a lot of competition for female polar bears as they only breed once every three years. Males win females by fighting off other males that are seeking to breed with the female in question; generally the larger of the male polar bears wins the opportunity to breed with the female. Due to the fact that the larger males are generally the older males this means that male polar bears, that reach sexual maturity at about 6 years old, will not usually gain the opportunity to successfully mate with a female until they are around 10 years old. For the female polar bear she reaches her sexual maturity at around 4 years old and mates once every three years. Female polar bears ovulate after induction meaning that they do not release eggs for fertilization until they mate with a male, as such it may take a few days of mating in order for her to successfully conceive. During the mating season paired off polar bears may stay together for a week or more in order to mate successfully. Polar bears do not; however, mate for life and one male may impregnate multiple females in one breeding season. 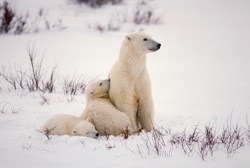 A pregnant female polar bear has eight months in which to gain over 400 pounds to ensure survival of her cubs, during this time a female must also create a den in which to birth her cubs and provide them protection from the elements. Polar bear dens have just one large area that is generally slightly raised from the entrance of the den and the large area contains a hole in the top to provide a fresh air supply to both mother and cubs. The young polar bear cubs are generally born anytime from November to January and will not step out of the den in which they were born until early spring. The average female polar bear has one or two cubs at once and these cubs are reliant upon her for her milk as well as her body warmth during the cold harsh winters of the Arctic. When they are born polar bear cubs are only 400 to 700 grams each and they cannot open their eyes. The polar bear cubs depend upon their mother for constant feeding and her body warmth which means that the mother must feed off her fat reserves during this time in order to protect her young. Polar bear cubs can nurse for nearly three years; however, generally by age two they are weaned but will remain with their mother for her protection against predators as well as to learn their hunting skills from her. Once the cubs reach around three years of age; however, the mother polar bear instinctively wants to breed again and must chase away her cubs or risk them being chased away by pursuing male polar bears.

In the wild fully grown polar bears have no natural predators although man has seen to it that these great white beasts developed one predator as he has hunted them for their coats and large heads to hang as trophies. Aside from man the only threat to a fully grown polar bear is another fully grown polar bear. For polar bear cubs the world is a slightly more dangerous place and they can often be pursued by other polar bears, carnivores native to their habitat or even their mothers who were unable to store enough fat to make it through the long period of nursing during the winter. Still the biggest known cause for polar bear deaths in the world is that of hunting by man. Although a 1973 ban on polar bear hunting with large boats or aircraft made a dent in polar bear hunting it did not seem to have a great enough impact on this majestic creatures mortality rates. Many governments have reacted to the recent decline in polar bear populations by regulating hunting of polar bears on their land and some countries have even banned polar bear hunting all together in an effort to help and preserve the largest of bear species.

Even with hunting of polar bears restricted and banned in some countries these large beasts face other challenges to their well-being some of which no one can initiate a “quick fix” to repair. One such factor affecting polar bear mortality is that of climate change. As temperatures in the Arctic increase the polar ice caps melt and destroy the habitat of the polar bear leaving this large creature with less and less space to live in. Other environmental factors having a great impact on the polar bear include oil companies drilling in polar bear territory, oil spills in polar bear territory, and exposure to toxic chemicals through both the air and water. It isn’t just environmental influences that are decreasing polar bear populations though, other factors affecting polar bears include starvation, disease and parasite infestations. Starvation is the biggest killer of polar bears, particularly older polar bears or polar bears suffering from parasite infections that leach the nutrients from the bear’s system. Younger bears that have recently left their mothers and are inexperienced or unskilled hunters are also particularly susceptible to starvation. Lastly parasitic infection as well as disease can greatly impact polar bear populations by either leaching nutrients from the bear’s system as mentioned above or by creating major physical damage similar to the damage of heartworms in domestic dogs. Since polar bears feed off common hosts to these parasites they often unknowingly contract them and without any veterinary care they soon succumb to disease.

As human beings become more aware of their natural environment and the toll that we are placing on the planet as a result of our industrial nations we must also realize that the changes we are making to reverse these negative effects are not just being made for us. In addition to decreasing the prevalence of health conditions such as asthma an increase in environmental awareness is also saving the planet by reducing chemical and toxic fumes and run offs. It is these toxic and chemical fumes and run offs that are adding to the variety of struggles that the polar bear population is currently facing. With a few changes in our individual lives the resulting effect could be so great that it not only aids our own race but it also helps the planet to flourish and boosts the population of a variety of threatened and endangered species including the polar bear. The unfortunate aspect of species that are threatened by any variety of elements is that without conservation efforts these species will be gone for good. Despite the many technological and scientific advances of our society once these species become extinct they will be gone from not only our live but also the lives of future generations.