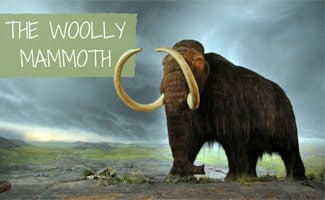 Woolly Mammoth (also known as Tundra Mammoth) walked the Earth some .15 million to 10,000 years ago. While generally referred to as the Woolly Mammoth it is also known by its Latin name Mammuthis primigenius and by the term “tundra mammoth.” The Woolly Mammoth, the most recognized species of mammoth to ever walk the Earth, lived across the northern hemisphere, from North America to Siberia. It made its home in territory that many creatures today, including man, would find inhabitable but this giant wooly creature made its home in these frozen lands of the northern hemisphere during the Pleistocene era. Learn more about its physical characteristics, why it went extinct and more.

Physiology and Size of The Woolly Mammoth

The Woolly Mammoth is often depicted by the media as being of fantastical proportions; however, specimens that have been found show that it was likely not much taller than the modern day African elephant, Mammoth measuring in between 9 to 13 feet tall. Despite its somewhat “normal” height the Woolly Mammoth actually weighed more at around 8.8 tons. These large Elephantidae are most commonly recognized by the very adaptations which allowed it to survive in such frigid climates – its long shaggy hair insulated its large body from the cold. The long hair was around 1 meter (or 3.3 feet) long and while this served to protect the Woolly Mammoth from the elements, it was actually the softer wooly undercoat which protected the skin and kept it insulated. Much like modern-day double coated dogs, an undercoat draws moisture away from the skin and keeps the skin protected and an overcoat which is rougher serves as the first layer of defense against the elements. Biologists who study the Woolly Mammoth compare its wooly coat to that of the common day ox that lives in the cold temperatures of the Arctic.

One of the most efficient adaptations that enabled it to live in such cold climates was an adaptation to its hemoglobin. It had three specific genetic mutations that are commonly found in reindeer and musk oxen as well as other creatures that live in extremely cold climates, these mutations enabled the animal’s body to deliver oxygen throughout the body to prevent freezing during even the coldest temperatures in these extreme environments. Without this genetic mutation the Woolly Mammoth would not have been able to survive life on the freezing tundra, even with a thick and wooly coat and a 3 inch layer of blubber. There is no use in being warm on the surface if inside your body is freezing to death.

Biologists have reviewed Woolly Mammoth remains and cave paintings that depicted them to find the skull was particularly tall and featured a large knob at the top which is similar to an elephant skull but larger. The Woolly Mammoth also featured a lump on the shoulders which is believed to have featured a spine (certainly not as large as those found on dinosaurs like Spinosaurus, but large all the same) that carried fat deposits, aiding in insulating the Woolly Mammoth against the cold. It had teeth that were efficient in chewing the thicker tougher grass that grew on the frozen tundra. Though these differences from an elephant may seem small in comparison, they help us better understand the features which assisted the Woolly Mammoth in surviving the harsh climate in which it thrived.

The Extinction of Woolly Mammoth

Despite its great size and its many adaptations that contributed to its survival on the frozen tundra, the Woolly Mammoth is believed to have become completely extinct in 8,000 BC. In the majority of the world, the Woolly Mammoth became extinct at the end of the Pleistocene era due to a culmination of factors which made it simply impossible for this giant beast to keep up. The main contributing factor to the extinction of the Woolly Mammoth is thought to be due to the incredible temperature change that came at the end of the ice age. For an animal designed to live on frozen tundra, an increase in land temperature resulted in inhospitable atmospheres and the Woolly Mammoth was forced to migrate to cooler areas which, as the planet was warming, were becoming fewer and fewer.

Scientists and geologists believe that 10,000 years ago global warming decreased the habitable area for the Woolly Mammoth from 2,970,000 square miles to 310,000 square miles. This sudden decrease in available habitable territory took its toll on this mammals population and before the human race even made its mark on the population, the great beast had already begun to see the end of the line.

While some of the Woolly Mammoth population was more than likely able to survive through the warming period that came after the end of the ice age, the remaining population rapidly declined after humans moved in to its territory. It was not so much the human race that brought the end for this species but the human race certainly helped to finish them off. The amount of food that was obtainable from a giant Woolly Mammoth was more than enough food to sustain a human family for a large time period in the frozen tundra. So despite the danger of hunting these armored beasts the risk was often worth the reward. Unfortunately the already suffering Mammoth population just could not withstand the assault by humans and by 8,000 BC they were nowhere to be found.

Despite the fact that this species of giant creature has been extinct for so long there are still some conspiracy theorists who believe that there are small herds of Woolly Mammoth that survived the increasing climates and the human hunt. They believe they are still living in the tundra in the northern hemisphere. While these individuals are likely the same individuals who believe that dinosaurs still live in the deepest ocean pockets, perhaps we shouldn’t dismiss them so quickly. There have been no confirmed sightings of the giant beast to the current day; however, anything could be possible when it comes to the ability of this planet Earth to sustain life!

Since the first Woolly Mammoth specimen was recovered in 1799, hundreds more specimens have been located (156 or more, all located in one location in Siberia)! What is interesting about the findings is that the remains were so well preserved due to being deeply frozen or mummified in their natural icy cold habitat. Biologists believe that some were buried in icy deposits during or shortly after their death, preserving the body at cool enough temperatures to effectively preserve the skin as well as internal organs and skeleton.

Check out this video of a recently unveiled 42,000 year old baby Woolly Mammoth. Its body was preserved in ice and was on display to the public in Asia.

Such amazing findings provide much insight in to a species than the fossilized specimens of dinosaurs that paleontologists refer to in their study. Utilizing the frozen Woolly Mammoth specimens biologists are able to determine its structure, the size of internal organs, the age of the animal at its death, diet, health and often cause of death as well. The sheer wealth of information that is made available to scientists as a result of intact specimens provides more information about these giant beasts than anyone could ever have imagined!

One of the biggest sites of Woolly Mammoth recovery is the Berelekh River in Yakutia in Siberia. Geologists and biologists believe that this area became a mass burial ground for 156 individual Woolly Mammoths after they were swept in the water by the strong current or fell to their death in the icy water below. It was not just water that took the lives of these immense creatures; however, the land itself often posed a risk too. As it walked across frozen land the Woolly Mammoth was unable to tell whether the ground beneath the frozen ice was solid or not until it was too late. This may have led the specimen to fall to its death in potholes, rivers, lakes, or other hidden crevices below the ice. The life of the Woolly Mammoth was certainly not a safe one even though these large beasts were about as prepared as they could be for the environment in which they lived.

Biologists are actively working to locate Woolly Mammoth specimens and study them before natives find them and put the learning opportunities at risk. Unfortunately, the fact that the tusks of the Woolly Mammoth were made from ivory, they have become a rather large source of income for hunters who come across a specimen. While intact tusks are not a requirement for biologists, the tusks can provide just as much information about the individuals as can the rest of the mammal. Scientists find themselves fighting against locals who retrieve specimens and seek to make their fortune by selling some or all of the Woolly Mammoth remains to the highest bidder. It is unfortunate for those who seek to recover these creatures in the name of scientific research and discovery that they must fight against modern day elements to discover more about the past.

Creating a Hybrid via DNA

Some researchers have suggested that research on these giant extinct beasts should be done a la Jurassic Park. That is, that DNA from frozen specimens should be combined with that of an Indian elephant to create a Woolly Mammoth hybrid. It is uncertain as to whether this would actually work; however, research has shown that interbreeding between African and Indian elephants was somewhat successful. The moral question here remains, would this be something that should be done? Even if viable DNA samples of the Woolly Mammoth were retrieved, should it be combined with that of a modern day elephant to create this hybrid ice age – modern day creation that may possibly unlock a whole new world of discovery? Who knows what devastation such a creation could create or what information such a creation could unlock? As with the concept of cloning, there are those who are for it and those who are against it. But for now the point remains moot as there are no viable Woolly Mammoth DNA samples capable of completing the experiment.

The Future: Will the Woolly Live On?

Whether or not biologists are capable of recreating the Woolly Mammoth through a hybridization process, they have been fairly successful in depicting the long extinct Woolly Mammoth with the help of the specimens they do have at their disposal. Frozen Woolly Mammoth specimens give so much more insight in to the structure of this giant creature in comparison to fossilized remains and, from their research so far, biologists already know much more about this creature than they do about many other ancient extinct creatures. While the battle still rages over whether or not to attempt the recreation of a Woolly Mammoth through hybridization and while the battle rages on against greedy locals who pillage grave sites, the tireless work of scientists moves forward. Through patient analysis of specimens and tedious research of tiny fibers, the Woolly Mammoth is coming back to life even without a DNA sample.

Do you think a DNA hybrid should be attempted with a Woolly Mammoth and the Elephant?