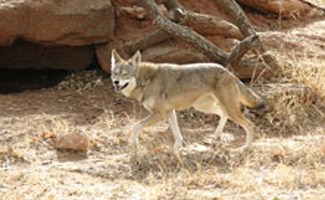 The red wolf, also known by its scientific name Canis lupus rufus, is native to North America. While the red wolf was once rather populous throughout the United States ranging from Texas to Florida and up to New York, this incredible creature is now nowhere to be found in the wild. There are many reasons for the extinction of the red wolf in its natural habitat but this hardy creature has shown its resilience through captive breeding programs and reintroduction to the wild.

The red wolf is most widely recognized for having a reddish tint to its coat and is generally smaller in size than the gray wolf. The larger red wolf, usually a male, can grow up to five feet long and can weigh in at around 80 lbs. The red wolf can be recognized not just by the color of its coat in comparison to the gray wolf but also from some of its differences in physical features. The red wolf as opposed to the gray wolf has larger ears and a wider head and also features a significantly smaller ruff around the neck. In the wild the red wolf was an apex predator, a creature that knew its way around forests, coastal prairies and swamps and had the knowledge to provide for itself and small family packs. The red wolf was not; however, able to escape rampant disease, habitat loss and predator control programs that all but wiped this species off the face of the Earth.

While thriving in the wild the red wolf would live within family packs which generally consisted of the breeding “parent” wolves and their pups that could vary in age from newborn pups to pups of 2 years of age. As they grow to around 2 years of age the red wolf pups would move out on their own to find mates. Red wolves reach their sexual maturity at around 22 months of age and so it is important for the older pups to leave the family unit in order to establish their own den and family pack. From February to March red wolves seek mates and breed and around two months later the pups are born. A red wolf litter can consist of anywhere from one to ten pups and litters are generally only carried once a year and in an effort to maintain their safety the mother red wolf will often move her young from one den to another in order to avoid predators. Red wolves are particularly family oriented as are most Canids and they tend to their young until they are old enough to venture out and form family units of their own.

Life in the Pack

While red wolves do live within family units they are not particularly receptive to other wolves stepping in to their territory and in an effort to deter foreign wolves from stepping in to their territory and reducing the availability of food they will mark territory with their scent – this process is done by urination on boundary trees. Within their family pack; however, the red wolf acts as a particularly attentive parent with the mother taking precautions to ensure the safety of her young. Even though the red wolf is a nurturing parent; however, it still feeds in a hierarchy with the older and stronger pack members eating first. Red wolves tend to eat alone with distinct portions of food designated to each individual in the pack. By establishing hierarchical order within the pack red wolves do not just make sure that each member of the pack knows its place in the social order but they also enable more fluid function of the pack as a whole. While the young within a pack move from their family pack to their own pack the parental units within the pack generally mate for life.

Helping Save the Red Wolves from Extinction [VIDEO]

This video is provided courtesy of the BBC show Vets in the Wild. Steve & Trude visit North Carolina, where the Red Wolf is under threat of extinction.

The pack size of the red wolf in the wild can vary from just two individuals (a mated pair) to around twelve individuals. One factor that generally affects the size of a red wolf pack is the availability of food within the area. The more food available to the wolf pack the larger a pack will tend to be. The less food available to the pack the younger the offspring will be when they leave the den. While the pups are living within the den, however, they will be cared for by both the mother and father. While most activity of the red wolf centers around the family pack the red wolf is not solely a pack hunter although on some occasions they have known to be, it is rather believed that the red wolf hunts down its prey and utilizes that prey to feed the pack according to hierarchical status. The red wolf hunts at night and tends toward rabbits, deer and raccoons.

While many stories of wolf attacks on humans are sensationalized in movies the red wolf has never been known to attack a human and their shy nature is more than likely the reason for this. The red wolf generally hunts and feeds at night and while it was occasionally known to feed upon cattle this shy and reclusive wolf generally fed upon creatures that were easily accessible to the den such as rabbits, deer and raccoons. The red wolf and its family pack will ultimately avoid humans at all costs as generally humans mean trouble for these endangered creatures.

While the red wolf was once a thriving species through a culmination of factors this slender Canid soon became one of the world’s most endangered Canids. In 1973 with a dwindling population the red wolf was added to the endangered species list. Continued presence of the factors which pushed this Canid species to the brink of extinction resulted in a population of only seventeen wolves in 1980. The remaining population of red wolves was captured by biologists in order to attempt a captivity breeding program and restore the red wolf population. After the capture of the remaining seventeen red wolves from their wild habitat, the United States Fish and Wildlife Service labeled the red wolf as an extinct species in the wild. With the beginning of the captivity breeding program, however, the red wolf population was soon to begin to rise again.

The purpose of the red wolf captive breeding program was to begin to repopulate the wild with red wolves bred out of the program and in 1976 the first two wolves were released in to the wild. Unfortunately their release was deemed unsuccessful; however, a second try at release in to the wild was attempted in 1978 and was deemed successful. After the first successful release of red wolves back in to the wild a greater effort was made to continue this practice and this time was focused on the release of the wolves in to their more natural habitat in North Carolina at Alligator River National Wildlife Refuge. This refuge continues to be the site of a red wolf population that seems to be surviving the elements of nature rather well. The initial breeding program also established the first island breeding site on Cape Romain National Wildlife Refuges Bull Island in South Carolina. This program went on to breed many red wolf pups that were later released in to the wild in North Carolina. Since the beginning of the captive breeding program over a hundred wolves have been reintroduced in to the wild and even more have been born. The red wolf population has continued to grow as a result of these conservation efforts and with over one hundred new wolves introduced in to the wild the population has come a long way from the last seventeen wolves that were rescued at the beginning of the breeding program.

Releasing Red Wolves Back into the Wild

Since the beginning of the conservation effort to re-release red wolves back in to the wild three other island population programs have been started in an effort to safely breed red wolf pups and release the young adults to the wild. Of those three other programs only one has been forced to close its doors as a result of potential encounters with humans, the remaining two programs remain in St. Vincent Island, Florida and Cape St. George Island, Florida. While conservation efforts have made attempts to restore the red wolf population to other areas of the country including the Great Smoky Mountains National Park, these re-introductions have not been particularly successful and these individuals wound up being relocated to North Carolina where the red wolf seems to thrive. The captive breeding program for the red wolf now has more than thirty participating facilities hoping to boost the survival of this Canid and re-introduce it in to the wild. So far the re-introduction and captive breeding program has been deemed a success and made the red wolf the first species in the United States to be reintroduced in to the wild after extinction.

While the red wolf has managed to fight its way back to survival with the help of captive breeding programs and reintroduction efforts one has to wonder how successful these efforts will truly be if the species is reintroduced outside of wildlife reserves. While certainly hunting efforts should be lessened if not eliminated as a result of endangered species laws factors such as cross breeding between coyotes and red wolves and deforestation have certainly not been addressed in regards to the potential success of this species in its natural habitat. Unfortunately for the red wolf it seems that the only chance that this amazing creature has at survival is one within the confines of a wildlife preserve. While these wildlife preserves may be far from the one hundred mile stretches that single red wolf families thrived upon in the wild they may, unfortunately, be the only shot that these creatures have at making it through extinction.

Canid Species and the Red Wolf in Perspective

But really, what is the big deal about saving the red wolf species? The red wolf is just one of two wolf species, the second species being the grey wolf. Within the red wolf species are three subspecies; the Canis rufus floridanus that went extinct in 1930, the Canus rufus gregoryi which went extinct in the wild in 1970 and the Canus rufus rufus which went extinct in the wild in 1980. It is the Canus rufus rufus that has been impacted by the reintroduction of red wolves in to North Carolina but even with increasing numbers the red wolf Canus rufus rufus species is still considered to be critically endangered. With only two subspecies of red wolf remaining and only two species of wolf remaining can the world really afford to miss this Canid species? Without the wolves present it seems that prey numbers would still be maintained by other predators such as coyotes and black bears but what role did these creatures play in their ecosystems? Red wolves were top predators within their ecosystems that helped to manage the population of other mammals and even with other species taking over this role the lack of red wolves in the ecosystem would still leave a gap. This gap would result in the expansion of other animal populations which would topple the balance of the ecosystem. It is not just that the red wolf is an amazing animal that is worth keeping around simply so that other generations can enjoy its presence but it is also an animal worth keeping around because without it the health of other species and forest ecosystems will be at risk.