Environmental Disasters: Types And 10 Big Ones

By the very nature of this planet, Earth is constantly in a state of change. Some of these changes become so devastating in their after-effects that they are recognized as environmental disasters.

What Is An Environmental Disaster?

Environmental disaster – A natural or human-caused incident which results in a negative or “disastrous” impact upon the environment.

We focus on a select few of the thousands of disasters that have affected the globe. This doesn’t indicate that one catastrophe is more notable than another. Every environmental disaster is devastating and significant.

After being struck by a 9.0 magnitude earthquake, a massive tsunami followed which devastated Okuma in Fukushima, Japan. This resulted in the Fukushima Daiichi nuclear power plant failing.

To date, this disaster comes in second only to the Chernobyl nuclear accident in terms of the devastation it created. The atomic meltdown began when the water was unable to flow in to cool the reactors and subsequently overheating occurred. As the situation worsened, radiation began to seep out from the damaged reactor and affect the local environment.

According to officials, it could take multiple decades to clean up the devastation left from the nuclear meltdown of the Fukushima Daiichi nuclear plant. No one is certain of the extent of the damage that has already occurred.

Radiation poisoning killed many workers who tried to contain the damage caused by the meltdown. Additionally, trace amounts of radiation are affecting water supplies and grasses on which livestock feed.

With water and food sources both becoming tainted by radiation, this event is expected to have long-lasting effects on the population of Japan. Radiation effects on the environment are unknown in terms of marine life and local wildlife.

In December of 1984, a pesticide plant in Bhopal, India, released a toxic gas cloud of methyl isocyanate that killed approximately 3,000 people. This gas cloud is the deadliest human-made environmental disaster in history.

According to the sources, some 15,000 individuals died as a result of the immediate and delayed after-effects of the toxic gas cloud. The toxins released created a poison which harmed and killed many living creatures in the area.

3. The Great Smog Of London

In December 1952, a thick fog descended upon London. It formed from thick air pollution that collected as a result of diverse weather conditions. The cold weather, windless conditions and an anticyclone caused the pollutants to accumulate close to the ground, making the usual London fog much thicker and more toxic.

Because the primary heating source in the 1950s was coal, much of the pollution in the atmosphere was thick coal dust which caused respiratory irritation. Over four weeks, some 4,000 people died from respiratory distress and other illness prompted by pollution.

Another 8,000 deaths were later attributed to the pollution present in the smog. While the smog itself was thick with many chemical pollutants, researchers believe  sulfur dioxide caused the most deaths. 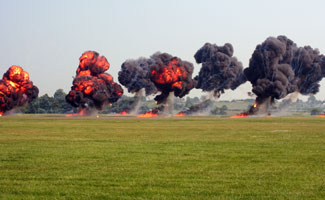 No list of environmental disasters would be complete without the mention of the Chernobyl nuclear power plant explosion that occurred in 1986.

When the nuclear reactor core of the power station exploded, over 50 tons of radioactive material polluted the atmosphere. The explosion and the subsequent radiation poisoning left cities abandoned and still stand isolated from the modern world. One example of this is the city of Prypriat.

Around 350,000 individuals were evacuated to minimize their exposure to radiation as a result of the explosion. According to officials in the cleanup efforts, 4,000 deaths and over 70,000 cases of disability due to radiation exposure occurred. Children born after Chernobyl experienced high incidences of down syndrome, chromosomal aberrations and neural tube defects.

Adults and older children exposed to the radiation were more likely to develop cancer and other illnesses. Many went untreated due to the poor healthcare system made available to them after their exposure to radiation.

Here is a video that shows what Chernobyl looks like today:

The Dust Bowl took place in the U.S. and Canada in the 1930s during a drought. Farming land that didn’t use crop rotation methods experienced severe winds, and a dust bowl occurred on the prairie lands. The most famous book based on this topic is The Grapes of Wrath

During the time of the Dust Bowl, the over-farmed land was arid, and as winds picked up, they blew vast clouds of dust that reached as far east as New York. The thick dust stuck to people’s lungs and made it impossible to farm the land and grow fertile crops.

An estimated 100 million acres of land in Texas, Oklahoma, Colorado, Kansas and New Mexico were affected. As a result, hundreds of thousands of people left their homes due to a lack of food and economic opportunity.

6. Contribution Of CFC’s To Ozone Depletion

The use of chlorofluorocarbons (CFC’s) may not seem to measure up to environmental disasters like the Fukushima nuclear power plant meltdown, but the results are just as long-lasting.

Up until recently, many of the products that we used in our daily lives contained CFC’s. Overuse of these CFC containing products contributed substantially to the depletion of the Earth’s ozone. As CFC’s release into the environment, they are photo dissociated and create halogen atoms which destroy the ozone.

Before we discovered the ozone-depleting properties of substances like CFC’s, much of the ozone was already depleted. It is estimated that it takes 5 to 7 years for these substances to reach the atmosphere. They can continue depleting the ozone for up to 100 years.

Life on Earth is exposed to increased levels of UV light when damage occurs to the ozone layer. Some researchers expect the ozone layer to recover over time as we reduce the use of these ozone-depleting substances. But many scientists are not as confident since humans continue to find new ways to destroy our planet’s protective atmosphere.

The second incidence of the Bubonic Plague claimed 200 million lives, taking 150 years for the population of Europe to recover.

8. Introduction Of Rabbits To Australia

The introduction of something as “harmless” as a rabbit may not seem significant. However, in Australia rabbits are believed to be one of the most devastating factors, responsible for destroying native species. As European rabbits were introduced, they fed on native plant species and with such a rapid reproduction rate plant species were unable to maintain their population.

The rabbits also contributed to the erosion as they fed on plant species and left topsoil to be ravaged by weather conditions. Rabbits first came to the country in 1788, But, efforts are still in place to control the rabbit population, including the release of rabbit-borne diseases, shooting and poisoning them, and destroying their warrens.

The development of the Africanized bee by hybridization between African and European honey bees created an extremely aggressive bee. The aggressiveness of these bees drove many European bee colonies from their hives and resulted in the killing of the queen bee.

This invasion resulted in a reduced population of European honey bees, and as a result, agriculture suffered as fewer honey bees live on to promote honey production. 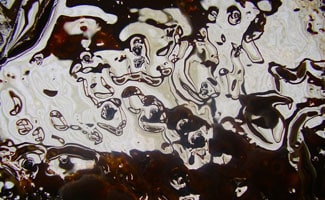 While the Exxon Valdez spill is not the largest oil spill in history (Deepwater Horizon in 2010 suffered the most oil spilled), it is one of the most recognized.

One thing that makes the Exxon Valdez spill so devastating is that oil spilled in a location where cleanup was difficult. This made it much harder to reduce the environmental impact and much of the wildlife was affected, including sea otters, sea birds, seals and salmon.

Due to the slow response of cleanup crews, much of the shoreline suffered from exposure to the oil. However, once cleanup efforts launched, they were extensive. Unfortunately, the extensive cleanup efforts resulted in only 10% of the spilled oil recovered.

Learn more about disasters, including wildfires and disaster relief after they happen.

What can we do to minimize the risk of these terrible catastrophes in the future?

About The Author: Kimberly Alt

One of Kimberly’s favorite things to do is cook. She is trying her best to be more conscious about the nutrients she puts into her body and enjoys trying new recipes. Kimberly grew up helping her dad with the family garden and hopes to have her own garden some day. She enjoys brightening up her dishes with the food mother nature can provide and enjoys composting her produce scraps.

Disclaimer: The information provided through this website should not be used for diagnosing or treating a health problem or a disease. It is not a substitute for professional care. If you have or suspect you may have a health problem, you should consult your health care provider.

Disaster Relief: How To Help The Impacted And Prepare For Emergencies

The March 2011 Earthquake in Japan

A Nuclear Situation in Fukushima Japan

newest oldest most voted
mainuddin sayyed
Hello,gone through this topic ,really filled with a sea of information .I have no words for it…..but there is one thing I want to know is about the references supporting this topic….
Regards
Vote Up0Vote Down  Reply
ome
what are disaster manegment
Vote Up3Vote Down  Reply
All Content © 2020 Cover Story Media®, Inc. All Rights Reserved. Earth's Friends® is a trademark of Cover Story Media®, Inc.
Contact | Privacy Policy | Terms of Use | Disclosure
You are going to send email to
Move Comment