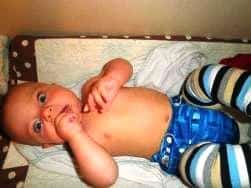 I just returned from a trip to my mom’s house in North Carolina.  It’s always nice to visit other than the fact that my baby doesn’t sleep well when we travel (does any baby, really???).  This trip was slightly complicated by another issue too, though.  I use cloth diapers at home, but I don’t expect my mom to give up her washing machine to poo filled diapers.  Not to mention, disconnecting my diaper sprayer at home sounded no more appealing than sticking my hand down and rinsing a cloth diaper in her toilet (UGH!).

So, I bought some disposable diapers for the trip.  I had a $2.00 off coupon for Pampers, so that’s what I got.  I didn’t think it would matter too much – as long as they didn’t leak.  It was only for a week, after all.  I used one the night before we left so I wouldn’t be leaving behind any smelly cloth diapers at the house and then put one on him for the road.  He was changed three times along the way, and I didn’t notice any issues during those diaper changes.  However, by the time we finished the ten-hour drive to my mom’s, he had a bad rash. Not just your typical red bum, slap on some diaper rash cream type rash (and I will also add he hasn’t had a rash since we used disposables back when he was a newborn).  It was a bleeding, bumpy, yeasty rash on his penis and scrotum (sorry to be so descriptive, but, seriously??? My poor baby boy!!!).  How could that happen so fast???  He was a trooper, but I felt horrible.

Chemicals and Scents in Disposable Diapers

Obviously, I did some research that led me to choose cloth diapers in the first place, but I’ll be honest and say that the majority of my choice had to do with money.  I found some great cloth diapers for a good price and I figured I’d save a good $1000+ by making an initial investment.  I also liked the idea of keeping diapers out of the landfills (since we all know they take like a billion years to decompose. Maybe this is a SLIGHT exaggeration, but they are bad!).  I hadn’t, however, really thought about how disposable diapers could potentially hurt my baby.   I HAD heard stories about Pampers causing chemical burns, but I THOUGHT they had changed the new ones so that would stop happening.  I still wonder if maybe that is what happened.  I decided to do a little research to see what exactly is in disposable diapers (after I went and bought some Earth’s Best chlorine-free diapers for my baby boy, which helped with the rash, but didn’t make it completely go away).

What’s in YOUR DIAPER? 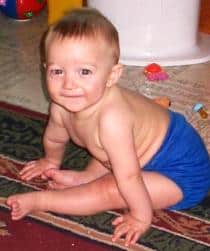 Almost all disposable diaper companies (other than “organic/natural” diapers like Earth’s Best) use Chlorine to bleach diapers and the result is the release of dioxins.  The EPA lists dioxins as highly carcinogenic.  According to the World Health Organization, exposure to dioxins may cause skin reactions and altered liver function, as well as impairments to the immune system, nervous system, endocrine system and reproductive functions.   If that’s not scary enough, the crystals inside of disposable diapers that soak up a pound or two of pee (that alone is a little scary when you stop and think about it!) is the same chemical that was removed from tampons due to concerns with toxic shock syndrome – Sodium Polyacrylate.  No long-term studies have been done on these chemicals, so we don’t really know the effects as of yet but it does not seem too safe.  Compound that with dyes, other chemicals (tributyl-tin and volatile organic compounds which have been linked to cancer) and perfumes that are often harmful and irritating and it makes you sort of wonder why more people don’t use cloth.*

Clearly, disposable diapers are still on the market, so I am absolutely NOT saying that they are evil, horrible things that should never touch your child’s body.  However, when there is an affordable alternative (Yes, cloth diapers CAN be very affordable! – Another blog for another day! You readers have to hold me to all of these blog promises!) that is better for your baby; if possible, why not give it a shot?  It is understandable if you don’t have access to a washing machine regularly (I’m not sure your laundromat neighbors would be thrilled with you throwing poopie diapers in the washing machine where they wash their work shirts, but maybe what they don’t know won’t hurt them!?!  ;)). 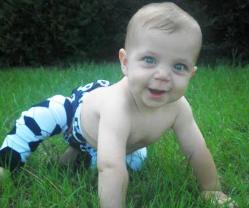 If you are breastfeeding, the early days are REALLY easy!  You just rinse with a hot water cycle, wash warm, rinse again (I use cold on my second rinse) and hang to dry!  Pretty easy and my water bill only went up by $5/month!  It can be debated as to whether the energy to clean cloth diapers is really greener than buying disposables.  However, I will argue that potential health risks to your baby combined with the fact that disposable diapers sit in landfills for 10-20 years (minimum estimates put out by disposable diaper companies – which they released as GOOD news! Really? 10-20 years is GOOD???) is MUCH more “natural”.

My 9 month old never had a single diaper rash until we switched to those darn perfumed Pampers.  Purely anecdotal?  Yes.  But, it convinced me that I had made the right decision for my little guy (I already felt good about his cute cloth diaper bum anyway!)!