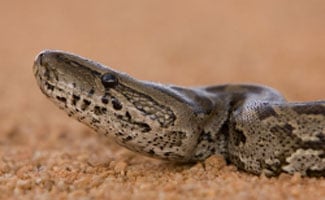 A recent study published by the Research on Invasive Burmese Pythons in Everglades National Park and the Southeastern United States, the introduction of exotic snake species has had an incredible impact upon the natural wildlife of the southern Florida swamps. So significant has the impact of these foreign snakes been in fact that a number of species of small mammals are now on the verge of extinction. A recent study by the United States Geological Survey has revealed a notable drop in sightings of raccoons, possums, foxes, rabbits and bobcats in the swamplands.

What is the Python?

There are a number of python species around the world but none are native to North America, in fact a number of large snakes that are currently decimating North American land including: anacondas, boa constrictors and pythons, are all exotic on the North American continent. The python appears to be a significant problem when it comes to Floridian swamplands however. Pythons are a snake genus that can be found in Africa, Southeast Asia, India and Indonesia. There are seven known species of python that are found in these areas: the Angolan python, the short-tailed python, the Indian python, the ball or royal python, the reticulated python, the African rock python and the Timor python. Of all of these species there are two that are known for being invasive species in North America, particularly in Florida: the Indian python and the African rock python.

About the Indian Python

The Indian python is found in both southern and southeastern Asia and generally grows to anywhere from 8 to 10 feet in length.  The largest recorded Indian python measured in at 15 feet long. By nature the Indian python lives in grasslands, marshes and swamps and so it is not difficult to see how this species can thrive in the Floridian Everglades. These slow but long snakes are extremely skilled swimmers and tend to feed on small mammals, reptiles and birds. Indian pythons are considered to be of a near threatened status by the IUCN.

About the African Rock Python

How Do These Non-Native Pythons Come to be in the Floridian Everglades?

In 2011 the United States government banned the importation of Burmese and other python species with the exception of the reticulated python and the boa constrictor but this ban came a little too late. Before the government put out the new regulations, enough of the non-native species had been released in the Florida Everglades to pose a significant threat to natural wildlife. How did these snakes come to be in Florida you ask? Those snakes that are now loose in the Everglades were once pets and when they became too large or too much to care for they were released in to the wild. Releasing non-native species is a significant problem with any animal species – even ants, but for a species that grows as large as the python, the problem is even bigger!  Why do these people release animals that they usually spend a fortune to purchase in the first place? More often than not the snake reaches a size that is unmanageable or the owner is no longer capable of providing food for their snake and they release the snake in hopes that it will be able to provide for itself. These snakes seem to have no problem fending for themselves, but the natural wildlife in the area does!

How Significant is the Threat of Non-Native Snakes in the Everglades?

Biologists believe that there is currently anywhere from thirty thousand to one hundred thousand snakes that have been released in to the wild in the Florida Everglades. With such incredibly high numbers it is impossible to even know where to begin destroying the pest species. While biologists recognize that they will likely not be able to completely wipe out the foreign species, they do believe that there is a possibility for them to quarantine the damage to the Florida area.

Why Does An Increase in Pythons in the Everglades Matter to You?

How Can the Python Numbers be controlled in the Everglades?

It is important to control the current python population in the south Florida Everglades in order to preserve native species and reduce the potential for attacks by pythons on humans. While there is little the average person can do to impact the numbers of pythons that currently exist, one of the most significant things that can be done is to discourage the ownership of these exotic snakes. If a friend or family member of yours insists on owning one of these snakes ensure that if their new pet becomes too much, that they turn them in to a local shelter or rescue organization and do not release their snake in to the wild.

Professionals Are Controlling Python Populations Too

Professionals are fully equipped to control problem python populations both in knowing what to expect and having the equipment to control these pests. A sixteen foot Burmese python is able to kill a fully grown man and it is important to note that these snakes should not be approached by anyone but those professionally trained to handle them.

Wildlife control specialists begin hunting problem pythons by looking at water sources close to where these snakes have been spotted. Snakes like the Burmese python require a permanent source of water so water bodies are one of the most common resting places for them. It is important for these “hunters” to monitor nearby trees and dark hiding places as well because pythons are skilled climbers and can squeeze in to dark hiding places.

Once problem snakes have been spotted it is important for them to be removed. Removal may require multiple hands depending upon the size of the snake and it is crucial that handlers know how to keep away from the snake’s head to avoid getting bitten. Most snake removal specialists will utilize a metal stick designed to handle snakes without having to get too close to them. These sticks enable handlers to hold down the head of the snake while approaching it to pick it up. Once removed from the area, the snakes are placed inside snake bags or boxes depending upon their size so that they can be taken away from the scene.

What Do Professionals Do With Removed Snakes?

One of the first things that these removal specialists will do when they have a problem python on their hands is locate local snake specialists. These specialists often have contacts with local zoo’s, snake rescues, snake enthusiasts and snake lovers in general. Hopefully by reaching out to this network a problem snake can be re-homed. While these snakes cause problems to local wildlife and natural habitats because they are non-native animals, they are also creatures that cannot help their circumstance. If these creatures are not re-homed somehow using local networking, they must be destroyed. Most pest removal specialists really do not like to destroy the snakes that they remove from local areas; however, if there is nowhere else for the snake to go there really is no choice. Unfortunately as the problem python population grows in Florida there is less and less room in rescues and the like for these large non-native “pests.”

Removing snakes from an area is not the only job of these pest control specialists trained in python management. It is important that these professionals also spend time surveying the area for signs of other snake activity. Some things that these people may look for include snake skins, snake eggs and freshly born snakes. All of these pieces of evidence indicate that there is a booming snake population in the area. This means that simply removing one snake is not going to make much of an impact in the problem the pythons are causing. In order to ensure that their efforts are productive and efficient these professionals look for snake skins to identify other large individual snakes that may be around. For example, after catching a six-foot python they may also spot the shed skin of a much larger snake which tips them off to the presence of multiple serpents in the area. Finding eggs or egg shells is another indication that these pest hunters have more work on their hands. These two things are evidence that there is a breeding population that must be controlled if the snakes are to be eliminated completely. Even removing a male and freshly hatched young may not do the job if a female is still carrying some eggs and has not yet been caught. Finally, it is also important to ensure that as many young as possible are removed from a site that shows evidence of hatchlings. Leaving behind any of these hatchlings can contribute to repopulation of the area.

At the University of Florida a team of researchers are coming together with the U.S. Fish and Wildlife Service, the National Park Service, the U.S. Geological Survey, the South Florida Water Management District and Davidson College to take a closer look at the impact that Burmese pythons are having on the ecology of south Florida. This team is utilizing a number of important tools such as GPS transmitters, accelerometers and radio telemetry to try to understand the booming python population currently in the Everglades.

It may seem strange that this type of research could contribute to helping remove the problem species; however, by understanding the habits of the pythons better plans for their removal can be developed. The devices being used to track and trace these python populations in order to determine where they are really thriving in addition to what food sources they are most attracted to. By calculating these factors, wildlife removal specialists are able to locate breeding populations and remove them in order to better resolve the ever-increasing snake problem in the area. Additionally, by analyzing their research and passing on the information that they find, more accurate snake removal and deterrent methods can hopefully be developed in order to prevent the problem from reoccurring in the future.

It may seem unfair or cruel to not only remove these snakes from the homes they have built but in some cases to also destroy them, but there is little option. If these problem populations continue to thrive soon enough native Floridian species will be endangered.