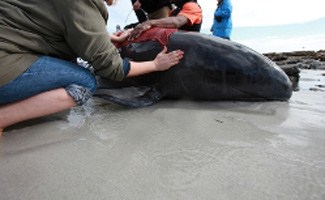 New Zealand’s South Island commonly sees one whale stranding incident a summer stranding itself on its beaches, but the summer of 2012 saw three beached pilot whales incidences and two of those saw a total of one hundred and fifteen pilot whales beaching themselves. In this article we will take a look at the most recent beaching of pilot whales which involves some ninety individuals.

The Most Recent Beached Pilot Whales

On January 23, 2012 on the South island of New Zealand 90 pilot whales were spotted by an aircraft as the pilot of the plane was flying over Farewell Spit. Conservation staff have put their efforts in to cooling the whales in the hope that when the evening tide rises, the whales would be able to swim back out to sea. As of January 24th the stranding left thirty-six of the original ninety stranded whale’s dead and forty more of the whales are in danger of dying as they still remain stranded. Some of the original stranded whales were refloated with help from the conservation workers on the scene, but many of them have been unable to find their way out to deeper water.

Early on January 24th, some of the forty remaining whales were able to swim in shallow waters but they were not able to get in to water deep enough to swim free before the tide went back out. Conservation workers have remained by the sides of the stranded whales trying to keep them cool and wet until sundown. The final hope of conservationists is that the whales will be able to free themselves on the next high tide.

Farewell Spit, New Zealand is no Stranger to Whale Beaching’s

Conservationists go down on record as saying that Farewell Spit, New Zealand see’s approximately one whale beaching a summer, at most two but this year they have seen three in total. In fact as early as early January, Farewell Spit saw a pod of twenty-five whales strand themselves and sadly seven of those were unable to survive. Another stranding in the same area in November of last year saw a pod of sixty-five whales strand themselves; forty-seven of those whales were unable to swim back out to deeper waters.

What Are Pilot Whales?

There are Two Species of Pilot Whales

Where Do Pilot Whales Live?

Why Do Whales Beach Themselves?

Some believe that the impact of pollution. Many times when bodies of beached whales are analyzed the findings point to extreme levels of pollution that have caused the stranded whales to become ill. Whether this illness leads them in to shore from an inability to survive, or whether it is the pollution that disorients them no one is really sure.

One of the most common theories in relation to the stranding of giant pods of whales is the illness or injury of a single whale. As the injured whale tries to save itself unable to swim in the deep waters any longer, moving in to the shallows, it becomes trapped by the changing tide. The injured stranded whale lets out cries of distress and it is believed that the rest of the whales from the pod rush in to try to help. Whales are such social animals however, that it is said that they will not leave one of their own to die alone.

The Sound of Being Human

Another of the more common theories behind whale beaching’s is that these creatures are following sonar noises or even human noise pollution. It is said that the high-pitched noises can cause whales to become disoriented and stray in to shallow waters where they become trapped on the beaches unable to save themselves.

What is the Most Likely Theory of Whale Beaching’s?

There is evidence that points towards all three of these theories as being feasible. Sick whales have been found beached, polluted whales have been found dead and military testing has proven sonar to be exceptionally dangerous to sea life. Certainly these are not the only theories for whale beaching but they tend to be the most prominent and if we don’t find a way to intervene soon there is no telling how much damage we will do to the wildlife of the world’s oceans.