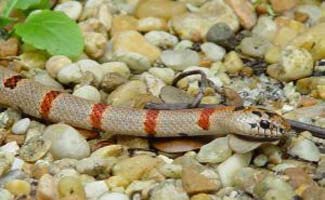 When it comes to phobias, ophidiophobia (the fear of snakes) is one of the most common. While only 15% of snakes worldwide pose a danger to humans, snakes still strike fear in many of us. We’ll cover some of the world’s most recognized venomous snakes, including how to identify them and where in the world you can find them. Read on to find out if one of these venomous serpents lives in your backyard!

Many people ask about poisonous snakes, when really they should be using the term venomous. These two terms are often used interchangeably, but they’re actually quite different. Most snakes that are dangerous to humans are venomous, not poisonous (constrictors pose a totally separate type of danger). Both poison and venom are toxic substances that can harm or kill you, but the difference between the two terms is in the way the toxic substance is delivered to the victim.1

Poison is a toxin that enters the body through swallowing, inhaling or skin absorption, while venom is actively injected through a bite or sting.  Poisonous animals often don’t actively attack their prey; rather, they release their toxins as a result of being touched or eaten. Venomous animals are more active in defending themselves because the venom must enter a body through a wound to be effective.

Occasionally an animal can be both venomous and poisonous. A species of snake found in Japan, the Rhabdophis tigrinus, has venomous saliva and poisonous compounds in nuchal glands found in the skin of its neck. Another example is the blue-ringed octopus, which is venomous when it bites with its beak but is poisonous if swallowed.

What Exactly Is Snake Venom?

The common characteristic of all venomous snakes is the presence of venom glands in addition to specialized fangs designed to inject this venom into prey. Venom is a type of saliva that has been modified to include toxins designed to immobilize prey or to protect the snake when confronted. Not all venom is alike, however, which is what makes certain snakes significantly more deadly than others.

What Percentage Of Snakes Are Venomous?

Extremely Venomous Snakes Around The World 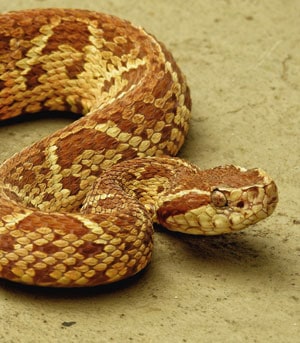 The jararacussu is native to Eastern Brazil, northeastern Agentina, Paraguay and southeastern Bolivia. This venomous snake is like most other snakes in that the underbelly is a much lighter color than the rest of the body, appearing almost yellow.

The body of the jararacussu can vary depending upon the sex: the females are black and yellow in color, and the males, which are smaller and thinner, are a brown or black color. Moth sexes have a deep black head. The jararacussu feeds on small rodents in their preferred habitat — land close to lakes and rivers. 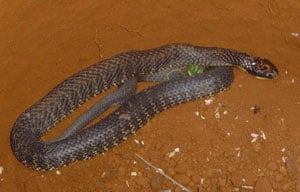 The tiger snake, otherwise known as the Notechis scutatus, lives only in Australia in subtropical and temperate regions. Although there is a significant amount of diversity in the Notechis genus, it’s important to know that these snakes tend to live within distinct populations that, depending upon the different populations, may be completely isolated from other tiger snakes or may live in overlapping geographical areas.

The tiger snake can grow up to 7 feet long and are recognized by their orange, orange-brown, black and yellow coloration, with darker bands of color along the body. The underside of the tiger snake, like that of many snakes, is much lighter in color and is yellow to orange in color. The tiger snake can tolerate low temperatures; however, it’s much more likely to be active on warmer nights and prefers to live in coastal environments.

The venom of the tiger snake is extremely poisonous and can kill humans. This particular snake’s toxin is extremely dangerous because it’s not only a neurotoxin (it attacks nerve cells), but it’s also a coagulant (it clots blood), a myotoxin (it attacks and kills muscle tissue) and a haemolysin (it breaks down red blood cells).  The tiger snake injects an avaerage of 35mg of venom per single bite; however, it has been known to inject as much as 180 mg per single bite. 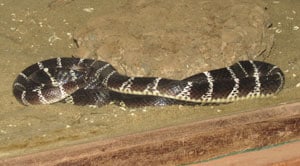 The common krait, otherwise known as the Bungarus caeruleus, is known for being one of the four most poisonous snakes in India and is native to the Indian sub-continent, particularly in South India and Sri Lanka. This extremely poisonous snake is known for its ability to live in a wide variety of locations including fields, scrub jungles, termite mounds, people’s houses, rat holes and termite mounds. One key factor that these snakes seek when establishing a “home” is the presence of water.

This snake varies in color but is most commonly a dark blue-black color or a pale blue-grey color with white cross bands and a lighter underbelly. The common krait is a nocturnal snake and is rarely spotted during daylight. This snake largely feeds on other snakes but will also eat small mammals, lizards and frogs. It’s less aggressive than other venomous snakes; however, if adequately agitated, it will bite and hold on for a significant period of time, which allows for a large amount of venom to be injected with a single bite, making it one of the most venomous snakes in the world.

The common krait’s venom contains neurotoxins that paralyze muscles. Once injected, the venom of this snake can take a long period of time to take effect and often it does so without any pain in the bite’s local area. Unfortunately for victims, this lack of pain often leads to a false reassurance that they are uninjured. Once the venom starts to paralyze muscles, it’s important to administer anti-venom immediately to prevent death.

During the paralysis, a bite victim may lose the ability to breathe and will require artificial respiration. The mortality rate from untreated bites is extremely high, and it’s recommended that any bite from this snake be treated immediately. Death is usually a result of suffocation by respiratory failure.

The Philippine cobra, otherwise known as the Naja philippinensis, is a spitting cobra that averages around 5-1/2 feet long; however, they can grow as long as 6-1/2 feet. This highly venomous snake is dark in color when young and a mid-brown color when fully grown. The Philippine cobra inhabits the islands of Masbate, Eastern Samar, Southern Leyte, Luzon, Catanduanes, Samar and Mindoro. Unfortunately, these snakes like to live in human settlements in addition to the dense jungle and open fields. The natural diet of this snake is small mammals, rodents, lizards, eggs, small birds and frogs.

The Philippine cobra is recognized by biologists and herpetologists for being the most venomous of all of the Naja genus of snakes because of the sheer potency of their venom. Its venom contains a neurotoxin that directly affects both the respiratory and cardiac systems. The most common sign of poisoning is the presence of neurotoxicity and/or respiratory paralysis. The venom is particularly fast-acting, and within minutes of envenomation the bite victim experiences respiratory failure and then death.

The fastest recorded case of death by the Philippine cobra occurred 30 seconds after the initial bite. The venom of this extremely dangerous snake is also known to cause permanent blindness when a victim gets venom in his eyes. Unfortunately for those faced with this cobra, the spitting distance is 10 feet so it’s important to keep your distance. 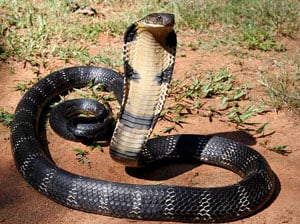 The king cobra, otherwise known as the Ophiophagus hannah, is found throughout South and Southeast Asia and southern areas of East Asia. It’s the most dangerous of all Asiatic snakes. This snake prefers to live in areas close to water in dense forest areas. The king cobra is the most recognizable cobra and is the world’s longest venomous snake. It can grow up to 18-1/2 feet, an incredible length which gives these snakes an advantage over any competitor. This amazing length, its agility and highly aggressive nature makes this snake a force to be reckoned with.

This snake weighs in at just over 13 pounds and is olive-green, tan or black in color and has light yellow bands crossing the body that go all the way down its length. The king cobra’s hood expands and is one of its biggest identifying factors. A second common identifying factor is the presence of two large scales, called occipitals, on the top of the head.

When biting prey or creatures seen as a potential threat, the king cobra uses two fixed fangs that sit at the front of its mouth to inject venom. The king cobra is a natural snake eater and commonly feeds upon rat snakes, pythons, cobras, small king cobras and kraits. The slow rate of metabolism means that this snake can go for months without another meal.

The venom of the king cobra contains neurotoxins and cardiotoxic compounds. This snake injects its venom into a victim quickly, and the venom immediately attacks the central nervous system. The venom quickly leads to cardiovascular failure which puts the victim in a coma, soon followed by complete respiratory failure and then death. The mortality rate for a king cobra bite can be over 75%, but this may vary depending upon how quickly a bite is treated, as well as the demographics of the individual who was bitten. 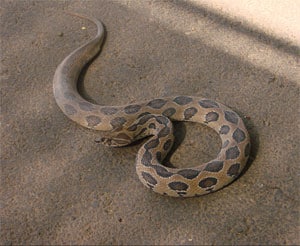 The Russell’s viper, otherwise known as the Daboia russelli, the chain viper or the Indian Russell’s viper, is found in Asia, particularly in the Indian subcontinent, Southeast Asia, Taiwan and southern China. Most commonly this snake species prefers to live in open areas, rather than in densely populated forests. It’s known for being one of the four most venomous snakes found throughout India and is recognized by ophiologists as being the species of snake that causes the most cases of snake bites and the most deaths from snake bites worldwide.

The Russell’s viper can grow up to 5-1/2 feet and is a rather slim snake. This snake’s nose is flat and raised, and the head is flat and triangular shaped. Its color is usually tan, brown or dark yellow and features deep brown spots all the way down the body. This viper has anywhere from two to six pairs of fangs, with the two front fangs being used to inject venom and the posterior fangs serving as replacements for the originals. It feeds mostly on rodents, which often leads them to highly populated areas, but they also feed on small land mammals and arthropods. Smaller Russell’s vipers have been known to cannibalize others of the same species.

The Russell’s viper is a particularly aggressive snake and will bite when someone attempts to pick them up. Most snakes of this species inject between 130-250 mg of venom per single bite. It only takes around 40–70 mg of its venom to kill a human adult. Side effects of its bite include bleeding from the mouth, blood in the urine, a drop in heart rate and blood pressure, localized necrosis of muscle tissue, disseminated intravascular coagulation and renal failure. Early exposure to treatment is the key in reducing the amount of damage caused by a bite from a Russell’s viper. Death can occur anywhere from one to 14 days after being bitten.

The Variety Of Venomous Snake Species Is Amazing

The variety of venomous snake species and the potency of their venom is simply amazing. Whether or not you are afraid of snakes or a snake lover, there’s no denying that the venom of these snakes deserves respect — not only because of the devastating effects it can have on those bitten but also because of the amazing applications that many of these toxins have in medical research. If it weren’t for the poisons found in a number of these dangerous snake venoms, many drugs today would not exist and a number of medical conditions like hemophilia would have much higher incidences of fatalities.

If you’re traveling abroad and want to learn about additional potential dangers in nature, be sure to read our article on the world’s most dangerous insects.

Which types of venomous snakes have you encountered and where?