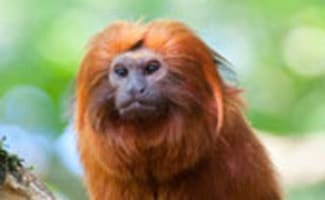 The Golden Lion Tamarin is native to the Amazon Rainforests of Brazil. Humans have threatened their habitats by illegal logging, poaching, mining and urbanization of the rainforests in the region. These monkeys were placed on the endangered list in 1992 and were bumped up to critically endangered shortly thereafter; however, due to extensive efforts to increase their numbers, they have begun to make a comeback in recent years.

The Golden Lion Tamarins live in a small area of Brazil totaling about 60 square miles. They have been successfully reintroduced to several regions of Brazil near Rio de Janeiro. They live amongst the swampy areas and hilltops near the coasts. The coastal areas are the most inhabited in Brazil, minimizing the natural habitats of these tree loving creatures. Their habitat has been chopped up and developed areas have grown up in between their habitats, making it hard for these animals to migrate throughout the rainforest to find mates. This, amongst other factors, has contributed to the low numbers of this species.

Golden Lion Tamarins tip the scales at about one pound. They are an orange, rusty color with long fur and a “mane” surrounding their faces (how they got their name). They are avid tree climbers and build their nests in holes in trees. They are active creatures, remaining active around twelve hours a day and travel with family groups (two to nine). Their diet consists of insects, fruits, small lizards and birds making them omnivores. In captivity, females have been known to be aggressive toward one another to compete for the attention of the males of the group. Babies are often born in pairs of two and the group will share the responsibility of the infant with the males often carrying the infants the majority of the time. As many as 40% of Tamarin babies die before they are one year old.

While the largest “predator” of Golden Lion Tamarins is the human, large birds such as raptors and hawks, cats and large snakes are their biggest natural predators. Their small size makes them easy victims for even small carnivorous predators.  They will typically not fight back with their predators.   Instead, they keep themselves and each other safe through vocalization and scent marking- often scaring off their predators before they attack.

Efforts to Save the Golden Lion Tamarin

Unfortunately, these instincts can’t protect them from the humans that threaten their very existence. Efforts to repopulate the Tamarins have been somewhat successful by nearly doubling their numbers. The population was at one point down to about 562.  However, in recent years 500 captivity-bred Tamarins have been successfully reintroduced into their natural habitat and another 500 are living in captivity. A natural habitat reserve was set up in 1974 in the coastal Rainforests of Brazil to protect these animals. This reserve has given breeders a place to safely release the Tamarins into the wild to reestablish the population. These efforts have been successful at moving this beautiful animal from the critically endangered list to the endangered list. However, they are far from out of danger. Continued urbanization and logging limits the amount of natural habitat available for the Golden Lion Tamarin. Without natural habitat, the numbers can only grow so much. Therefore, the future of this beautiful animal remains uncertain.