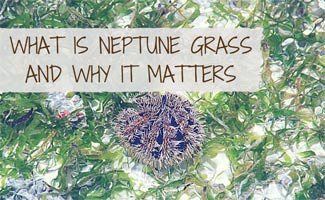 Ancient seagrass (aka neptune grass) is believed to be tens of thousands of years old and yet it may be at threat for extinction as a result of climate change. In this article we take a dive deep below the sea to find out what’s growing on the ocean floor and to better understand the most recent findings in regard to this ancient oceanic organism and its importance.

What is Neptune Grass?

Sea grasses are a group of flowering plants that belong to a number of different plant families including: zosteraceae, posidoniaceae, cymodoceaceae and hydrocharitaceae. Every plant in the sea grass group belongs to the order Alismatales and they all demand salt water environments to thrive. For the purpose of this article we will be looking at Posidonia oceanic (aka neptune grass).

What is Posidonia Oceanic?

What is the Significance of Posidonia Oceanic?

Researchers have found a number of samples of Neptune grass that sit as far as nine miles apart but are identical genetically. This means that the Posidonia oceanic is a particularly long living species. While this neptune grass is a long living plant, researchers now have concerns that the grass now faces a threat from the climate changes taking place. Neptune grass is known to be able to reproduce sexually, through cloning or asexual reproduction.

Asexually reproduced Neptune grass carries the identical genetic information that was carried in the original grass plant which is what researchers are looking at. These wide-spread samples of Neptune grass are interesting not only because they are asexually reduced but because they indicate that there is no degeneration in the cloned copies of Posidonia Oceanic. Further, research indicates that Neptune grass is a particularly long living plant and as such this indicates that this plant has been able to adapt over time.

Why does the Survival of Neptune Grass Matter?

The age of Neptune grass indicates that, not only has Neptune grass been able to adapt to a variety of conditions, but it is also indicative that it has been able to survive a number of conditions. When Neptune grass sections were believed to have begun their growth the ocean waters were much cooler than they currently are. The ability to begin growth in cooler waters and continue growing in warmer waters points to the hardy nature of the plant. The question that comes up now however, is that if neptune grass has been able to withstand climate changes in the past, why does it seem to be struggling now?

The Rapid Rates of Change

While the Neptune grass in question in this particular research study has shown the ability to adapt to slow changes in climate, there seems to be problem when it comes to the rate at which the climate changes. The current rates of climate change are taking place at such a significant rate that the neptune grass meadows are simply unable to keep up. The growth rate of the Neptune grass species is so slow that the cloned plants are able to grow in to the slow going changes that take place in climate. When the changes in climate take place at a much faster pace the slower growing Neptune grass is unable to adapt at a fast enough pace to sustain the changes that are taking place.

What Does Disappearance of neptune grass Mean?

The Importance of neptune grass

The Impact of Losing neptune grasses

If the neptune grasses of the world begin to fade away as a result of sudden climate change there is no telling just how much damage will be done. Not only will a number of species have no source of food, but the disappearance of neptune grasses also indicates that the ocean waters will also take a hit. Neptune grasses are believed to hold some 15% of the carbon stored in the world’s oceans and without those neptune grasses carbon buildup is likely to damage entire ocean ecosystems.

In this five-minute video, Dr. Michael Rasheed, Principal Research Scientist from the James Cook University’s Centre for Tropical Water and Aquatic Ecosystem Research (TropWATER) talks about their sea grass monitoring program off the coast of Australia. Their efforts have advanced the research and is helping to find ways to grow and sustain sea grass in the future.

Want to find out more about climate change. Read our article on global weirdness and its potential impact on the environment

What’s your take on global warming? Do you think neptune grass is at threat of extinction?

About The Author: Amy Brannan