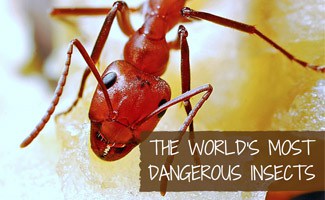 Insects may be some of the smallest creatures on the planet but they can also create some of the most damage when it comes to the pain and injury they inflict on human beings. Just think about all of the mosquito health warnings now for Zika Virus. In this article we will cover some of the most dangerous insects across the world including the mosquito, bullet ant, the Africanized honey bee, the bot fly and more. Each of these insects has the potential to cause serious harm if not death to the victim of its bite, sting or burrowing activity. Learn more about the characteristics of each of these bugs so you can fly away from them.

The very name of this bug should send you running but believe it or not a number of people attempt to keep this dangerous insect as a pet! As its name implies this insect is native to Africa and it is said that the venom of this critter is more than ten times as powerful as the venom of the cobra! The black and yellow African assassin bug is said to either inject or spit its venom at prey items rendering them unable to fight back. While a single bite from one of these bugs is not going to render you lifeless, more than one bite could certainly leave you in a lot of trouble. When hunting its prey this dangerous insect injects venom in to a prey item and as that venom liquefies its insides the assassin bug inserts its proboscis and sucks out the liquefied organs.

Africanized honey bees are probably one of the most commonly recognized of the most dangerous insects in the world. These insects are highly feared for their habitual swarming behavior and the potential death that can be caused by a single event of swarm activity. Africanized honey bees are most commonly found in Central and South America in addition to the American Southwest. Unfortunately, there is no way to distinguish an Africanized honey bee from a typical European bee. This inability to distinguish an Africanized bee makes it particularly difficult for anyone living in areas where these bees are known to inhabit since one accidental swipe at a hive can result in death. Just what is it that makes the Africanized honey bee such a dangerous threat? These bees are the most aggressive bees you will ever encounter and once they attack the entire hive will follow suit and chase you for over half a mile.

The human bot fly is perhaps one of the most disgusting of the most dangerous insects that you will ever run across. These creatures target the warm moist areas on the human body to reproduce and lay their eggs. After the eggs are laid the bot fly larvae burrow in to the skin of its human host and make a meal of human tissue they find within the area that they burrowed in to. The unfortunate part of the human bot fly for the human host is that these insects can live anywhere within the human body including the brain! Most species of this fly are found within South and Central America however, there are some species of this flesh hungry fly that can be found all over the world. Fortunately for humans there are a number of varieties of bot fly and not all of them target humans, in fact a number of species are highly targeted towards specific creatures and places on the creature. Some examples of other species of bot fly include the: sheep nose bot fly and the horse stomach bot fly.

The bullet ant is native to the rainforests of Paraguay to Nicaragua and at an inch long this creepy crawler has its particularly unusual name for a reason. When you get stung by a bullet ant it feels as though you have been shot. Of all of the varieties of insect bite that you could receive from any insect in the world, the bullet ant is most often scored as the most painful. As if the sting of the bullet ant wasn’t enough to make you shudder, these critters are arboreal ants that drop on to you and actually emit a shriek before biting you to warn you away from their nest. Sure, a single bite from one of these guys might not kill you but it is enough to cause spasming in the area of the bite for a long time following and enough bites from multiple bullet ants can cause death.

It may seem strange to see mosquitoes featured on a list of the most dangerous insects but it is true. Many people ignore just how dangerous these insects can be but these pests are responsible for causing more deaths as a result of malaria, than any other insect worldwide. The blood borne disease causes hundreds of millions of infections per year and with booming mosquito populations the number of cases of malaria continues to grow worldwide. Since mosquitoes feed on human blood they can easily infect a human being with malaria with a single bite.

Hazardous mosquito bites are currently in the news because of the Zika Virus.

You will find very few lists of the most dangerous insects that do not mention the siafu ant. These ants are most commonly found in central and east Africa and while a single one of these ants may not pose a threat, they are very seldom found as a single ant! These ants live in giant colonies that can contain as many as twenty million ants and when one ant attacks a prey item there are certainly more ant bites to follow! If you’re lucky then you can manage to outrun a colony of these hungry ants but if for any reason you find yourself unable to run, be prepared to be devoured completely by the colony! In most instances the siafu ant will cause death by asphyxiation as the result of being bitten which is fortunate for those who go on to be consumed. So strong are the jaws of these ants that in Africa they are utilized for make shift sutures in circumstances where medical attention is limited.

Not Limited to Exotic Global Areas

Contrary to popular belief the world’s most dangerous insects are not limited to exotic global areas. In fact, the most dangerous insect in terms of its rate of infection is the mosquito and this creepy crawler can be found in your own back yard! All of these tiny creatures may seem harmless in terms of their size, but when it all comes down to it many of these tiny insects hold much more potential for death and illness than much larger animals. The best policy is to respect all creatures for their abilities to cause illness and simply avoid or repel them as much as is humanly possible.

Tips for Avoiding the world’s Most Dangerous Insects

For some of these creatures it is as easy as avoiding those tropical rain forests or being vigilant when traveling to exotic areas. In terms of the more commonly found dangerous insects however, it is important to take precautions to avoid being bitten. For the world’s most dangerous insect, the mosquito, this involves regular application of insect repellant in addition to the utilization of mosquito nets when required.

Bug and insect bites are never fun. But as much as you avoid them, sometimes they are inevitable. Watch this two-minute video to learn what to do if and when you or someone you know is bit by a bug (whether it’s a minor bite or something more serious). Be prepared so you do not panic in the face of emergency.

Have you ever encountered an experience with an exotic or dangerous bug?

About The Author: Amy Brannan

New comments are closed at this time.