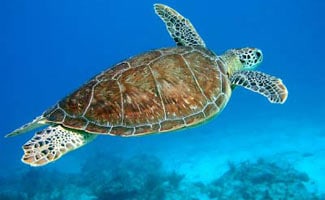 Have you ever asked your seafood waiter for turtle-safe shrimp? If not, now may be a good time to start. Why? Fishing nets used all around the world ensnare and kill sea turtles. Many U.S.-based ships use turtle escape hatches, a type of Turtle Excluder Device, which give the turtles an escape path. However, most foreign-based ships don’t. The result? 150,000 endangered sea turtles are at risk of being killed each year. How to save sea turtles?

Until 1988 we were able to save the sea turtles by the use of turtle escape hatches, which United States law required, allowing 97% of sea turtles to escape fishing nets unharmed. But recently the WTO (World Trade Organization) has been hampering such efforts, being pressured by foreign business interests. So, once again, sea turtles are in danger of getting killed off, and eventually going extinct.

History of the Sea Turtle

You think dinosaurs lived a long time? Not as long as sea turtles! Sea turtles have been around for over 100 million years, predating the last era of the dinosaurs. And while they are much smaller than some of the larger dinosaurs, there is one rare species, the leatherback, that weighs as much as a small car! Sea turtles have remained largely unchanged over the years. They are gentle creatures that have a longer life span than humans, but are not nearly as reproductive. They are migratory animals that will swim thousands of miles in their lifetime. However, they are also air-breathing reptiles and lay their eggs on land. Unfortunately, almost all their infants die, so each and every egg is key to the species’ survival.

Sea Turtles fight to survive the age of man 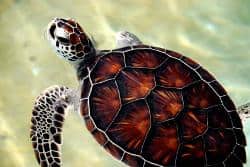 These creatures have been around since before the dinosaurs; but sadly, they may not survive the age of man. Every species of sea turtle is now threatened or endangered by predators, trash, and poachers. But the biggest killer of sea turtles? Shrimp nets. That’s why it’s essential that next time you order shrimp, you ask for turtle-safe shrimp. All it takes is one question. If enough people ask this question, it will raise awareness once again. You may ask, where can I find turtle-safe shrimp that will save the sea turtles?

Since 1998 over 3 million pounds of Certified Turtle-Safe Shrimp, caught by fishing gear that utilizes Turtle-Excluder Devices, is available to the public. Over 125 shrimping boats use these devices, and as a result the numbers of sea turtles being saved is once again slowly on the rise. But with the pressure of the WTO and its enforcement of what it considers to be illegal barriers to trade, it won’t stay this way unless consumers continue to act and request turtle safe shrimp. So how can you help save the sea turtles? When you buy shrimp, make sure you request shrimp from the following distributors:

The Loggerhead sea turtle is known by the scientific name Caretta, and is known for being the world’s largest hard shelled turtle. This beautiful and unique species has a considerably long lifespan and is an endangered species as a result of depopulation and a variety of other factors. The Loggerhead sea turtle is known for spending most of its time swimming in the open ocean or coasting on shallow coastal waters, and can be found within the Atlantic, Pacific, and Indian oceans as well as the Mediterranean sea.

The Loggerhead Sea Turtle is one of the oceans’ most majestic creatures and without the rescue efforts of conservation societies this incredible beast may not be capable of surviving much longer. To lose the Loggerhead Sea Turtle from the world’s oceans would not only be a disaster in terms of losing such a beautiful creature but it would also severely affect the balance of the ocean’s ecosystem.

Until then, thank you for being a friend of the Earth!