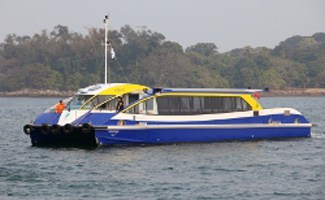 There are many concerns over the impact of our modern lifestyle on the planet and one of those concerns is the pollution caused by marine travel. In this article we will take a look at the world’s first hybrid powered ferry fleet and whether this technology can lead the way in environmentally shipping. The question remains: can shipping go green?

A number of ferries are used to move from the Hong Kong peninsula and the outlying islands multiple times a day, every day but a recent change to these ferries may play a significant role in reducing pollution. Japan now has a fleet of four ferries that are powered by solar panels on the roof of each ferry. These hybrid ferries are used to take golfers from mainland to an island course but they could be setting an example for the much larger shipping industry.

The Future of Solar Power

For a long while we have looked in to the potential for solar power to reduce pollution but until now there have been few advances in marine solar technology. The creation of this first solar marine fleet by an Australian company – Solar Sailor, may mark the beginning of a whole new world. Is this type of solar power the future of the shipping industry? It could be but there are some points to take in to consideration before getting too excited about a pollution free shipping option.

The Hybrid Feature of the Solar Ferry Fleet

The concept of a solar-powered shipping fleet is an exciting one…at least until the term “hybrid” comes out. The Hong Kong solar-powered ferry fleet is actually hybrid boats that rely upon solar power to coast in to and out of harbors; however this solar power is insufficient for the open ocean travel. Where these ferries can depend upon electricity stored by the solar panels for slower travel, the electricity simply isn’t enough to move the ferries at a fast enough pace on open water to be considered efficient. So what do the ferries depend upon in open waters? Diesel fuel. The concept of shipping going green doesn’t sound so feasible now does it?

Can Other Natural Energies be harnessed?

Some ask whether other forms of natural energy can be harnessed to reduce the dependency on diesel fuel and this is something that is present in one of the ships. The Solar Albatross depends both on solar power which it stores from the solar panels on the ferry’s roof, and wind power which is harnessed by two large sails that can be raised and lowered. Still, the combination of wind and solar power does not seem to be enough to address the need for a faster method of naturally supplying fuel to these large shipping vessels.

What Are the Benefits of Naturally Powered Ships?

While there is little possibility that shipping will ever be able to go completely “green” there are some good things to come from the use of solar-powered ships. If major shipping companies were to install solar sails on their ships their reliance upon oil and other fuel sources would dwindle. Even a slight reduction in the amount of fossil fuels utilized would make a significant dent in the amount of pollution being emitted during the shipping process. So while solar or wind powered ships may not be able to run completely on natural fuel sources the will still be able to make a difference in the overall scheme of things.

How Significant Are the Savings From Solar Powered Ferries?

Many potential buyers for the marine solar technology want to know just how big their savings could be in comparison to the significant investment that must be put in to installing solar panels. According to the Australian company Solar Sailor that runs the solar technology installation on these ferries, the fuel costs cut by the hybrid ferry technology is around 8 to 17 % depending upon the route of the ferry in question. While these fuel savings may be significant however, the repair bills and costs of maintaining the new fleet have been much higher than expected. According to the creators of the solar ferry technology, these unexpected costs are part of the learning curve for a company unfamiliar with running solar-powered ferries.

The Future of Solar Shipping

The technology being used to run the solar hybrid ferries in Hong Kong is not the only technology available for solar shipping. There are currently a handful of other companies testing out solar technology in shipping however; the technology of Solar Sailor is the most tested in the commercial market. The head of Solar Sailor reveals that he is currently in talks with a mining company to create a large solar sail for a huge vessel designed to move raw materials in bulk. What does this new development mean for solar shipping? Well for the Australian mining company it means that they will be able to cut an estimated 3.1 million US dollars or 3 million Australian dollars from their fuel bill. How does this savings compare? The cost of solar systems being installed is around 6 million Australian dollars so within two years the system will have paid for itself.

How Will Solar Energy Affect the Shipping Industry if it does take off?

If solar energy technology does take off the effect on the overall shipping industry will be mind-blowing. Currently it is estimated that fifty thousand ships carry ninety percent of the world’s trade cargo, if just a portion of these ships make the move to solar technology the impact on pollution of the world’s oceans could be amazing. Certainly, solar power is not a complete answer to the use of fossil fuels by large ships, but it is a stopgap to help to reduce the amount of fuel used by these huge ships. Is it feasible that this solution will be seen in the shipping industry any time soon? Not likely, the cost to install these solar panels is simply more than many companies are willing to invest for an unproven technology in their field. Perhaps in fifty years when more advances have been made, solar energy will be able to make a bigger impact in making shipping a greener industry.