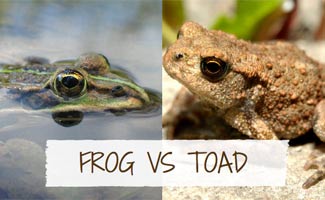 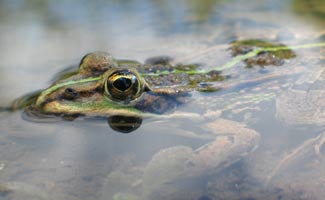 Frogs are amphibians that have eyes on top of their heads. Their eyes seem to bulge from their heads. They have webbed hind feet so that they are better able to swim in the water. They also have strong, long hind legs that are perfect for making long jumps, such as you would see in a frog jumping contest. Note: There is no toad jumping contest because toads are built differently for different reasons than frogs. Frogs also have smooth, sometimes slimy skin that helps them move through the water with ease. They tend to lay their eggs in clusters and do not tend to the young once they are born.

As you can see, much of the makeup of the frog is based on the environment that the frog lives in. Frogs tend to live close to the water because they like to be in the water. Their bodies are built for movement within the water and to further their ability to get near the water.

Frogs are hunted by many predators because they have limited defense mechanisms. In most cases, frogs will need to run into a place a predator is unable to go in order to escape the predator. Even man is a predator to the frog since the legs of the frog are considered a delicacy in some areas.

One of the most famous of myths about frogs concerns the kissing of a frog. This is based on a fictional tale that involves a frog being kissed, and then turning into a prince. The message is that you should never judge people because you have no idea what they are truly capable of. If a frog can be a prince, then anything is possible.

Another myth about frogs is that you can get warts from frogs. Only toads have warts, and not “true frogs”. Even so, warts on humans are caused by a fungus and cannot be transferred from a toad because it is an entirely different issue. 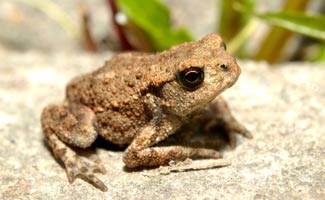 Every toad is actually a frog, but not all frogs are toads. Toads are a part of the frog family, which is why they share some of the same characteristics of frogs. Toads are quite different from frogs. Like the frog, the toad has developed the way it has because of the environment in which it lives. It must be able to survive in its environment and nature has allowed for adaptations that make this possible.

Toads, unlike frogs, prefer a dry environment. They are built thicker and more “squat” than frogs. Toads have rough skin that may be covered in warts. Their eyes do not bulge like the eyes of a frog do. Toads can also have poison glands situated behind their eyes. Some people mistake these glands for warts, which they are not. These poison glands present a major difference between toads and frogs. While frogs have many predators, toads have very few. The roughness of their skin and the taste of the poison which coats some of their skin is more than most predators want to deal with. Thus, very few predators ever bother with toads.

Like frogs, it is said that you can get warts from touching the skin of a toad. While it has already been mentioned that you cannot get warts from a toad, you should also understand that there is good reason to wash your hands after you touch the skin of a toad. The toad has a poison on its skin that comes from the glands behind its eyes. In some cases, enough of this poison can be lethal if injected or ingested by humans. However, it may be harmful to other pets and just isn’t something you want to keep around. So be sure to wash your hands thoroughly after touching a toad (or any other animal for that matter).

Toads and frogs have developed their own reputation in the world. In many ways, fiction has brought more attention to these animals than any other venue could have.

Over time, with the development of religions and spiritual concepts, the frog or toad has taken his place in the scheme of things. Egyptians worshipped frogs as the symbol of life or fertility. It has been said that this worship of frogs is the very reason that frogs were used as a plague on Egypt. (This is a common tactic used to change the meaning of or insult a symbol in a religion). Frogs have also been called demonic based on their status as being “familiars” of witches. The most probable truth of this is that many women who were known as “healers” tended to live off by themselves and fetch their water from wells, which would likely be surrounded by frogs.

Frogs are often used for science experiments and in one such experiment, have promoted the idea that change is acceptable if it is slow. The theory is that if you put a frog in boiling water he will jump out, but putting a frog in warm water, and then slowly bringing it to boiling will result in the frog being boiled. This probably has more to do with amphibious traits than it does with change in society.

Frogs are the main characters in many fictional stories, such as Wind in the Willows, Flushed Away, and Crunchy Frog.

In this short video, Malcolm shows a frog and a toad side by side and explains and shows some of the physical characteristics between the two and why they are very much different.

Now that you know the difference, what’s your favorite? Frog or toad?