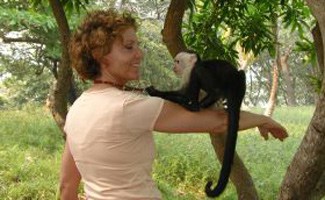 As our closest relative in the animal kingdom we are often drawn to primates in a way that we are not drawn to other wild animals. For some people however, the need to care for these wild creatures leads not only to poor health in primates but it also leads to poor decision-making by so-called “animal lovers.” In this article we will focus on the increase of primate pet ownership in England and why it is fueling the Royal Society for the Protection of Animals fight against primate pet ownership all together.

The Appeal of Primates as Pets

There are many reasons that people choose to keep exotic pets like primates but in 99.99% of cases, these decisions are poorly thought out. For some people owning exotic pets brings a popularity that they may not have found elsewhere. In other, more difficult to understand cases, people bring exotic pets in to their home due to a self-professed love for the species. Particularly when it comes to primates, there is a bond that many people feel necessary to maintain with our wild relatives, as though we owe them the modern conveniences that we have created for ourselves. The truth is, however, that primates fair perfectly well without interference from man and in some cases they find themselves even worse off when “cared for” as pets.

The Story of Mikey the Marmoset

Recently in the West Midlands in England, Dudley Magistrates’ Court found a couple guilty of causing an animal unnecessary suffering. The animal in question – Mikey the Marmoset. Mikey was four months old when the court showed a video of him being unable to walk adequately with his legs bent. In addition to not being walk properly, Mikey was unable to climb and he had advanced bone disease and seven different fractures in addition to a broken tail. These injuries cause Mikey an inordinate amount of pain and resulting in his euthanization by the Royal Society for the Protection against Cruelty to Animals. The couple who had purchased Mikey to keep as a pet, Lee Powell and Julie Ann Jones of Stourbridge were given a sentence that included: 300 hours of unpaid work, a demand for pay more than £2,700 in costs and compensation and they have been banned from ever keeping animals again.

Is the Punishment Enough to Prevent Future Animal Abuse?

With the degree of punishment given in the case of Powell and Jones, is it enough to deter future primate ownership by others? Sadly, the answer is more than likely no, which is why the RSPCA is attempting to ban primate ownership completely. Currently in the United Kingdom it is legal to purchase marmosets, tamarinds and squirrel monkeys in local pet shops as they do not require licenses under the Dangerous Wild Animals Act. Still while it is possible to purchase these animals at pet stores that is not to say that they should be purchased to live as pets. Primates simply do not thrive as pets, which is exactly why the RSPCA is attempting to completely ban their ownership throughout the United Kingdom.

So if primates are so close to humans in terms of ancestry and DNA, why don’t they make good pets? After all we should be able to understand the needs of these creatures being that they are so similar to us…shouldn’t we? The answer to that question is a resounding no. While we may have many similarities to primates, the differences that do exist are major ones. Primates are wild animals, animals that have not been bred in to captivity and domesticated over the years. Primates are not like our typical household dog, an animal that has been domesticated over thousands of years to live a life that enmeshes with our own. No, primates still rely very much upon their wild nature to survive and when deprived of their natural abilities and instincts they become sick, physically and psychologically.

Primates Need More Than We Can Offer

Primates are extremely complex creatures, in that respect they are not too much different from human beings but the things that these creatures need, we are often unable to offer. The primate society is extremely complex, it is a hierarchical society in which posture, gestures and facial expressions convey intentions, emotions and needs. As average pet owners, humans are unable to understand or cater to these needs and as such the primates go without their needs being met. Being understood isn’t only about having one’s needs met however, imagine living in a world in which you were the only human being and everything you said or needed was misunderstood. This would be an extremely lonely and frustrating existence. Evidence has already been uncovered in regards to the amount of frustration that many of these animals feel when kept as primate pets. In some cases primates go so far as to turn their psychological torture on to themselves and they begin to self harm, something which can quickly lead to other psychological conditions and illnesses.

The Social Nature of the Primate

By definition, the needs of social animals like primates require that this creature have regular interaction with a troop of their own species. This regular interaction is important not only to meet the primates needs, but it is also important for the creature to learn how to be like other animals of its species. Just like human young, primate babies learn everything they need to know from their mother, they receive teaching and nurturing and stimulation that have been developed over thousands of years of evolution. To believe that any human could pick up on the needs and demands of this complex social creature is not only egotistical, but it is also just cruel.

Currently the RSPCA and the Wild Futures association believe between 2,485 and 7,454 primates are being kept in captivity in the United Kingdom, it is the hope of these associations that banning primate ownership will eventually eliminate primate ownership all together.

How Mikey Sustained His Injuries

Many readers have contacted us requesting more information on Mikey the marmoset. One of the most frequently asked questions in reference to Mikey is how exactly he sustained his debilitating injuries. While under the care of Lee Powell and Julie Jones of Stourbridge, England, Mikey experienced a number of injuries from a variety of causes, most commonly nutritional deficiency. Veterinarians believed that the fractures that Mikey received during his life in captivity were the result of being poorly fed. In total, Mikey suffered seven individual fractures. More specifically, a diet that was deficient in calcium as well as vitamin D3 led to a metabolic bone disease that caused Mikey’s bones to be susceptible to breakage.

Mikey’s injuries came to light when the couple sold the four-month old marmoset to Sheila Lister. Proof of the poor diet that contributed to Mikey’s ill health can be found in the “instruction sheet” Lister received upon purchasing Mikey from Powell and Jones. The sheet outlined that Mikey should be fed marshmallows, fruit, vegetables and baby food. While under their care, Powell and Jones also fed Mikey Halib Orange and WellKid chewable vitamins to supplement his poor diet. These vitamins, not being made for primates were described by the RSPCA’s prosecuting attorney as being “wholly inadequate.”

How Mikey Suffered as a Result of his Injuries

When Mrs. Lister purchased Mikey from Powell and Jones she was already concerned for his health and brought him to the RSPCA Shifnal surgery for a workup. One employee of the surgery, Miss Bould, noted that Mikey was not exhibiting usual behavioral signs for a marmoset. Miss Bould stated that when Mikey was brought out of his cage he didn’t make any effort to escape, in fact when placed on the floor he could barely move let alone try to escape. Miss Bould shared that a healthy marmoset would present as being extremely aware and scared when released from its cage. A healthy marmoset would begin to exhibit destructive behavior, but Mikey did none of these things.

From looking Mikey over, veterinarians at the RSPCA Shifnal surgery found that Mikey had fractured bones that had been sustained weeks before Mikey had been sold to Mrs. Lister. These fractures already showed signs of healing. A primate expert who initially alerted Mrs. Lister and the RSPCA to Mikey’s condition stated that when Mikey was brought in for veterinary attention he knew he had numerous fractures just from looking at him. Jimmy Wick, primate specialist said that Mikey was crying and was unable to walk properly; instead he resorted to commando crawling across the floor. Wick made the effort to introduce Mikey to a female marmoset he had that had just had young of her own; however, due to the severity of Mikey’s injuries he was unable to hold on to her which caused him to cry more.

Reasons Why Marmosets Should Not Be Kept as Pets

Miss Bould of the RSPCA Shifnal surgery draws attention to the fact that Powell and Lee were wrong not only in their treatment of Mikey, but also in their offering him as a single pet. This type of behavior is torturous for an animal as social as a marmoset and would have inflicted mental anguish beyond comprehension. Miss. Bould states that how marmosets feed, groom and interact with other marmosets is a pillar of becoming a healthy and well-developed animal. By selling Mikey as a single pet, Powell and Lee further contributed to his poor health. While no one can tell exactly what Mikey was thinking or feeling, there is no doubt that his injuries caused him pain and he was unable to interact socially with other animals as he would do in the wild.

Marmosets, as primates require large areas in which to roam and this amount of space simply is not available in a home or residential property. Without room to roam freely or interact as they would in nature, there is no possibility for a marmoset (or any other primate) to develop in to a healthy animal. When kept as pets, marmosets are most often kept captive in small bird cages which provide inadequate room for stretching or “normal” social interactions. Even when kept and given free range in homes, the space within the home simply is not adequate and owners rarely consider dangers that could exist to the animal within the home. Normal household objects that may prove non-hazardous to “normal” household pets like cats and dogs, can pose significant threats to more intelligent and dexterous primate pets.

Additionally, potential owners for primate “pets” should consider what should happen if their exotic pet should escape. For animals that are used to living in very warm and tropical climates with plenty of native tree life and predators familiar to the species. Unfortunately when these animals escape in to non-native areas they face challenges unfamiliar to them which can threaten their survival as well as the survival of native tree and animal life. A single escaped primate risks a slow and painful death from exposure; multiple escaped primates can result in a native population being bred that can threaten smaller native animals competing for the same food resources.

Unfortunately, in the United Kingdom no license is needed to keep primates like squirrel monkeys, marmosets and tamarinds as pets. Even more unfortunate, no formal training is required to keep such a pet so those who do take them on are well equipped to understand the animals needs both in terms of diet and in terms of social interaction.