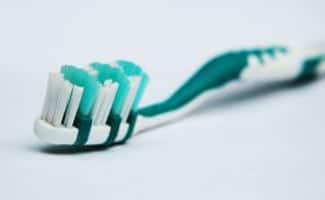 I remember going to the dentist as a kid and dreading the experience. Why? Not that any kid loves going to the dentist, but I was definitely ending up with cavities more often than not. This continued into adulthood unfortunately, and when I asked the dentist what I was doing wrong, he would explain to me that I had “strong gums, but weak teeth,” and that people were typically born with one or the other combination. Great, I thought. Well, at least I don’t have to worry about gum disease.

“What toothpaste do you recommend I use?” I asked the dentist, thinking that must be the culprit of my many cavities. He would reply with “it doesn’t matter, as long as you have flavor and fluoride.” Sodium fluoride has long been known to be a cavity fighter. And to my knowledge was never really a health concern until recently. But while this stuff is present in our drinking water here in the United States, it has been classified as a toxin in other countries. So which is it? Is sodium fluoride good or bad for you? Does it help prevent cavities, or does it cause cancer?

What is Fluoride and Where Does it Come From?

Fluorides, such as sodium fluoride, stannous fluoride, and fluoride monofluorophosphate (MFP fluoride), are created when the element fluorine combines with a metal or other substance. Fluorides are absorbed into the blood via your digestive tract, where they then travel and collect in high calcium regions such as your teeth and bones. Fluorides occur naturally in the air, water, as well as the earth. The fluoride in your body is mostly from water, food, fish, tea, coffee, dental products, you can even get some fluoride by using teflon-coated pans (who knew?!?).

Yes, that’s a well established fact. In 1945 water fluoridation began in the U.S. because scientists discovered a lessening of cavities in areas with fluoridated water (commonly referred to as “florinated water”). In my own experience, I went through rigorous research to find out what may be causing my cavities, and finally came up with a dental hygiene regimen that has left me cavity free for several years now.

So here I am content that I finally found a solution to my “strong gums, weak teeth” dilemma. And along comes a bunch of research suggesting that sodium fluoride is actually dangerous to our health (read: it’s a toxin). If “fluoride and flavor” is so good for our teeth, then what’s wrong with sodium fluoride? Recent research has shown that fluoride in high doses can be toxic. But isn’t that true of a lot of things we’re exposed to? Just what is a “high dose”? And what about long, chronic exposure to small doses? In other words, how “long” of a time-span do these research studies address? After consulting my dentist (who is, shockingly, pro-fluoride), and other health professionals, I found very few who were willing to take a negative stance on fluoride. So I’ve delved into my own research. Here are some sources I’ve come across:

Out of all these sites I found Cancer.org one to be the most useful and well-balanced, although I was impressed by the depth of research contained on FluorideAlert.org. It has made me think more about the potential long-term/chronic effects of regular sodium fluoride exposure. It seems to me that the biggest concern has to do with ingestion of fluoride vs topical application. I’m curious to hear your thoughts and opinions in the comments below – know of any key sources of information that I missed (I’m sure there are many!)?

This next video by a state representative who also happens to be a doctor, focuses on the point of ingestion (via our drinking water) vs topical application (toothpaste and mouth rinses) and the potentially detrimental effects of ingestion on children.

Joe Hensley, M.D. and  State Representative, on the Dangers of Fluoride [VIDEO]

So let’s say you do get too much sodium fluoride. What’s the worst that can happen? From my research, here’s some of the ugly stuff you can get:

Many reputable websites mention these ailments. Skeletal fluorosis is excess fluoride build up in the bones. This can eventually result in joint stiffness and pain, and can also lead to weak bones or fractures in older adults. In children, this can result in dental fluorosis, excess fluoride build up in the teeth, which prevents enamel from forming normally. This can cause permanent staining or pitting of teeth.

Other websites go as far as to mention arthritis, cancer, diabetes, endocrine disruption, kidney disease, male fertility, thyroid disease, and more. But my question is, if people have been ingesting sodium fluoride (and other fluorides) since World War II, and there are such serious long term side effects, wouldn’t we be hearing more about them by now?

How to Reduce Your Fluoride Exposure? 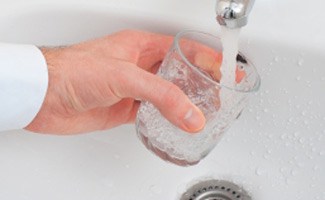 The best way to reduce your fluoride exposure, and particularly your fluoride ingestion (vs the fluoride you rinse with and spit out, for example), is to find out how much fluoride is in your everyday drinking water. Note that tap water, well water, and even spring or bottled water can all have higher or lower amounts of fluoride. As mentioned above, tap water, the only regulated source, does not always have the highest fluoridation content. What it does have is a guaranteed ceiling.

So, if your drinking water comes from a public source, contact your local community water system to find out how much fluoride is in it. I called our own city’s water department and they promptly returned my call explaining that our citywide fluoride levels are 0.5-0.7 milligrams per liter (or parts per million). As a public water customer you also have access to an annual Consumer Confidence Report on water quality. You’ll find out all the chemicals that are in your drinking water, not just fluoride. Call the EPA’s Safe Drinking Water Hotline at 1-800-426-4791 to find out more about drinking water safety in general, you may unearth something important I haven’t covered (if you do, please share it with me and our readers below). If you get your drinking water from a private source such as a well, you can hire a laboratory to come out and test fluoride levels.

Should I Remove Fluoride From My Drinking Water?

My integrative doctor is on the anti-fluoride bandwagon and a proponent of so called reverse osmosis filters (such as this one: APEC 5-Stage Reverse Osmosis Drinking Water Filter System (ROES-50) that remove fluoride and other toxins from your drinking water. However, I’ve also talked to experts who say those filters are typically used by bottled water companies and will removing everything from water, making it a useless clear liquid only good for hydration. In other words, valuable minerals and salts that are good for you are also removed.

If fluoride is still too scary for you, here are some fluoride-free toothpastes I’ve found:

Are There Alternatives to Sodium Fluoride?

Oil pulling is an ancient Ayurvedic detoxification practice of swishing around of sesame or coconut oil in your mouth daily for 15-20 minutes once a day. In addition to body cleansing, it is supposed to help dental and oral health. However, the ADA (American Dental Association) recommends against this for any sort of dental care. On the other hand, my wife’s dentist said it could not hurt and would likely reduce dry mouth symptoms. So, she felt oil pulling was worth a shot for anyone who was interested in trying it for any or all of its benefits. We have an article on essential oils that goes in-depth on the powers of oils and their health properties if you’re interested.

If you’ve heard that fluoride may be dangerous, you’ve probably also heard about triclosan (a chemical found in Colgate, for example). While there’s no definite research proving it’s dangerous, you can read our article on triclosan dangers and judge for yourself. Lastly, we’ve got a whole series of articles on holistic healing that address potentially harmful elements we’re exposed to on a daily basis and how to defend against them.

What are your experiences with sodium fluoride? Are you for or against its use?