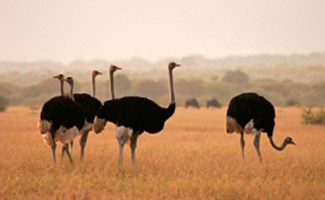 When it comes to ostrich populations, South Africa tips the scale with a population of more than 200,000 but a recent bird flu outbreak decimated many of these birds. In this article we will take a look at the recent devastating loss that many South African ostrich farms have taken as a result of a recent bird flu outbreak and the effects it will have on the country’s economy.

What is Bird Flu?

Bird flu or avian flu (HPAIH5N1) is a type of the influenza virus that generally only affects birds. On occasion bird flu can affect pigs and on rare occasions it can also affect humans. In the cases where humans have been infected with avian flu, their infection came as the direct result of handling birds infected with the virus. As with the human flu, avian flu can affect birds in different ways depending upon the severity of the strain that they are infected with. In some cases of bird flu, birds experience mild symptoms such as a reduction in egg production. In other more severe cases of the bird flu however many birds die and with the rapid spreading of the virus from one bird to another, and infection can kill off a flock of birds in no time.

How is Bird Flu Spread?

Bird flu is spread rapidly from bird to bird within the same flock but in the case of new cases of the bird flu, the cause is often migratory birds. As migratory birds move in to new territories when they are already sick with the bird flu, they bring it with them and infect local populations. Occasionally migratory birds can be carriers of the virus and not show signs, becoming hosts that go on to infect local bird populations. Bird flu can also spread through infected bodily fluids such as bird feces or saliva being transferred from one flock to another such as might be the case with farms that have multiple bird populations.

Can Humans Catch It?

Yes, but it is rare. There have been about 600 cases since November 2003 and most of these cases were isolated to 15 countries in Asia, Africa and Europe. These cases have been severe in nature with a high mortality rate. However, the majority of cases were from close or direct interaction with birds that were exhibiting symptoms of illness or even death as a result of the influenza.

There have been a few cases of lower pathogen avian flu (LPAI) but still these cases are not considered to have been highly contagious without very close contact with an infected carrier. Avian influenza in humans is monitored by the CDC so stay tuned if you want to learn more.

How Can Bird Flu Be Stopped?

There are a number of ways that bird flu can be prevented. The most effective method for preventing bird flu from spreading is to destroy birds that are sick and to fully sanitize the area before bringing any other bird populations in. It is also important for farmers to avoid contaminating farm equipment, clothing and feed with contaminated feces or bird saliva so that infection can be prevented for other bird populations on the farm. 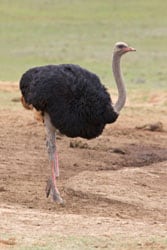 Ostriches are a huge course of income for South Africa; however, a recent bird flu outbreak has resulted in a sharp drop of ostrich meat exports for the area. For the first time in nearly a century ostrich farms all over South America are experiencing the aftermath of one of the biggest bird flu outbreaks it has ever seen. Just how was the outbreak handled? Birds that were tested positive for bird flu were slaughtered, birds from farms that tested positive for bird flu were slaughtered and birds that have been in contact with birds of farms that tested positive were also slaughtered. In total thousands of ostriches from the recent bird flu outbreak in South Africa have been destroyed in an attempt to prevent the virus from spreading. Were the outbreak to have continued and infected birds been left the virus would have continued to spread and not only infected other bird populations but perhaps also begun to affect humans as well.

“Culling” or reducing the flock of birds by slaughtering them, has cause a significant reduction in the ostrich population of South Africa. In turn, this has created a significant loss of jobs among the thousands of employees who labored on these once bustling ostrich farms. In addition to a lack of jobs, the flock culling has also resulted in a lack of meat which was one of South Africa’s biggest exports to Europe. Even were the ostriches to live however, the damage that has been done to the reputation of ostrich farms after the bird flu outbreak would have resulted in the same lack of demand for ostrich meat.

How is South Africa Handling the Bird Flu Outbreak?

The main priority of South Africa in this case has been to decrease the chances of the virus spreading by culling flocks of infected birds. In addition to destroying infected birds or birds that have been exposed to infection, the government has also banned farms that have tested positive from repopulating their bird populations. The markets for South African ostrich have come to a standstill and according to the government only when no ostriches test positive for the virus and a three-month “clean” period has been passed, will the ban be lifted.

How are South African Ostrich Farmers Handling the Blow?

For the South African ostrich farmers who have literally gone from everything to nothing in no time at all, the blow has been devastating. The government has offered small amounts of money to the farmers who have been subjected to the devastating culling as a result of the bird flu, yet the money offered has barely made a dent. Not only have farmers lost their entire farm populations, but they have also earned the reputation of being an “infected” farm, something which will be hard to live down any time in the near future. Certainly a small settlement can help to keep farms maintained for the future, but it will not pay for the wages of the thousands left unemployed by ostrich farms closing their doors for longer than three months.

What Lies Ahead For South Africa’s Ostrich Meat Trade?

According to experts, even if farmers do manage to pull their lives back together and repopulate their farms after a three-month clean period, the damage has already been done. It is believed that it could take up to four years for the ostrich meat industry to gain back the trust of the consumer and rebuilt what it once had before this latest bird flu outbreak.