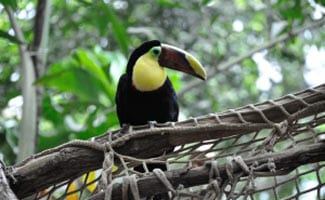 The world around us is not just going to change because of global warming, it is changing right now before our very eyes – all you need to do is open them and look to see the planet peril underway. According to the United Nations, we are currently losing species at one thousand times the natural rate of extinction. That’s up to fifty thousand species of plants and animals each year.

Dealers in Thailand often get away selling rare and endangered species as a result of lax of difficult-to-enforce laws. Thailand’s Chatuchak market attracts buyers from around the world, and illegal wildlife trafficking in South East Asia spreads from Thailand’s forests to as far away South America and Africa.

Rare animals nearing extinction often fetch high prices on the black market. South American marmosets go for $2700 each, and endangered tortoises from Madagascar fetch $500 each. The Thai police works with the National Environmental Conservation Organization to help curtail dealers efforts, but they are fighting a downhill battle. Think shark fins in soup and bear paws for ash trays. The problem doesn’t lie solely with the dealers however. There’s a reason the animal trafficking is so successful – the buyers. The business is valued at up to twenty million U.S. dollars, with American and China making up the top two importers of these illegal trades. What’s really sad? Ninety percent of animals sold as exotic pets into America die before they reach their destination.

Impact on the ecosystem

The loss of these animals doesn’t just affect their species. Entire ecosystems suffer from the loss of a species. There is no starker example of this effect than Madagascar, one of the world’s largest islands, isolated from mainland Africa for over 160 million years. Madagascar supports ninety percent of wildlife found nowhere else on the planet (since the animals can’t get off (or on) the island). Sadly, only ten percent of the natural habitat remains.

Certain animals are specific to their habitats, and have grown to survive through means dependent on their surroundings. Tree lizards, for example, have survived all this time by camouflaging themselves to look like the tree. If deforestation takes away the trees, the lizards will die out as well.

There are groups at work to protect and conserve these biodiversity hotspots. In particular, there are efforts underway to preserve the largest species of lemur, which weighs twenty pounds and can jump up to forty feet from tree to tree. These lemurs will not breed in captivity, which means if their habitat disappears, there is no way to save them.

The land supports more than just the animals

Deforestation hurts not only the animals. It also places the entire landscape in danger, which needs the forests to provide stability for the soil, which would otherwise collapse. Every year, 350 square miles of forest are destroyed. As a result, less than 10% of Madagascar’s original habitat remains.

In Madagascar, seventy percent of natives live on less than one U.S. dollar per day. They will do anything to make a buck, and sadly, the environment ends up paying the price.

But efforts are underway to restore the landscape. The government will currently protect land where new species are found. The Madagascarian RAP (Rapid Assessment Program) goes on missions to find new species, and so far they have been quite successful. Their efforts have resulted in the protection of over 8.6 million acres of land.

About The Author: Alex Schenker

Alex loves nature and does his best to take care of the planet. He doesn't take for granted the serenity that can be found in the stillness of an ancient forest, or the majestic power of the ocean's large waves as they crash on an isolated island shoreline. He wants to raise awareness for how simple it can be to make a couple changes in your everyday life that can make a huge difference for the environment in the long term.

How to Save Sea Turtles

newest oldest most voted
chocolate bar
I really wish that people would try to make this world a better place than it already is…well try to improve it, try to cut back on all of the electricity usage. Now I can go to Walmart, but all I see are people walking around texting. That is using up our resources…we aren’t going to stay like this forever!
Vote Up0Vote Down  Reply
Anonymous
I think that people examining this problem should not be too quick to judge. I think that many of us sitting in the first world with a decent income and a high standard of living simply cannot understand what it is like to live on a single dollar a day. The fact is that this is reality for a very large proportion of the world population. This is also the root of why people continue to participate in these crimes.

Consider the fact that in Thailand a single gibbon can earn a family up to 16,000 US dollars (in some cases even more). Then compare this to the fact that the maximum fine for an animal trafficking charge is 1,600 dollars. If your family were having difficulty eating and surviving, would you be tempted to try to bag a gibbon (or some other equally financially rewarding specimen)?

It only makes sense to me that in order to really try and solve this problem we need to understand and then attack the economics of the situation. I have not really spent much time thinking about this, but certainly one where making the penalty worthy of the crime might be worthwhile.

Trafficking in endangered species is big business. The problem is that no one really seems to have a handle on just exactly how big it is. It is so pervasive that likely estimates run into the billions of dollars per year. While each country has their own laws regarding the trafficking of wildlife, these laws are only as good as their enforcement.

The extent of the problem is really extreme. This ranges from cane rat meat (also known as bushmeat, for animals which are native to Africa and prized for their taste and protein content) to wild tortoise.

While much of this meat is highly prized by connoisseurs, there is also a big danger of becoming sick or catching some kind of disease from many of these animal products. Anyone out there interested in African swine fever? Come on, that sounds like it would a lot of fun! How about a rip roaring case of foot and mouth disease? Or maybe mix it up with a nice dose of bird flu or even mad cow disease? Where do I sign up?

Not all of these products are destined for the meal table. Many animals are intended to be sold as pets. Or maybe not pets in the traditional sense. In fact, a number of these exotic creatures are actually killed and stuffed as trophies. Others may be encased in lucite or a number of other substances to be made into trinkets.

Some traffickers focus on animal parts or entrails. Bear bile, for example, is highly sought in Asian communities. They believe that it helps with liver and stomach problems.

Whatever the reasons may be, trafficking in illegal animals and endangered species is certainly big business. It seems that our main problem is being able to enforce the many laws currently on the books.

Vote Up0Vote Down  Reply
Anonymous
The actual endangered list itself actually takes several pages just to look over. It is so over laden that sorting through is best accomplished by using an alphabetized list. Many experts believe that our world is losing up to 50,000 species of plants and animals each year. This is a rate equivalent about one thousand times the natural rate of extinction.

What are the reasons for such a high rate of extinction? Certainly this is not due to anything like the theory of natural selection, at least not exclusively. There are actually a number of different reasons for species to become endangered.

The first reason is habitat loss. This is the greatest, or most common, reason for species becoming endangered. The construction of homes, roads, loss of farmlands and a number of other reasons all play a factor. Sometimes land is reclaimed for a different purpose (such as the reclamation of rainforest in South America).

A second cause is pollution. Of course, we all know that pollution can take many different forms. This includes water, air and even soil. Substances which are dumped into an area can have unintended consequences. This includes killing everything from bacteria to insects to the animals which eat them. Additionally, something which has polluted the soil may even seep into the water and potentially come out of your faucet.

Disease is also a big killer of species. This includes not only naturally occurring diseases, but also those introduced by artificial or man made methods. A perfect example of this would be DDT. As it worked its way into the soil, it eventually seeped into the water and then gradually made its way up the food chain.

This started with the small water feeders and the fish who ate them. Then, it was found in the animals and even people who ate these fish. Some of these toxic substances even led to eagles and falcons producing eggs so thin that they broke just from the mama sitting on them!

Introduced species also may have a grave effect on the current eco-system. This means that somehow a new species or animal is introduced to an area where they are not native. An example of this would be the Spaniards bringing horses to the new world. Of course, this is not an example which caused recognized destruction, but it is valid nonetheless.

I have heard many times that there is a pretty large black market for rare and endangered animals. However, I was not aware that in certain countries these transactions are actually done more or less out in the open. One such country is Thailand.

This business equals billions of dollars annually. Thailand is one of the more obvious offenders with over 15 million dollars in illegal animal contraband seized in 2011. The majority of this illegal trade apparently takes place in rural areas along the land borders and interior waterways, locations chosen specifically because they have little or no enforcement, police presence and high levels of poverty.