What is Attachment Parenting? 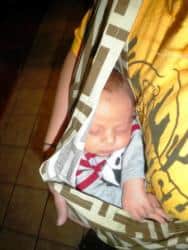 Dr. William Sears takes credit for giving a name to parenting with your child’s individual needs in mind. Essentially, attachment parenting means listening to your child and following their lead. I am certain that many parents have been doing this forever. He’s just the genius that put a name to it (I am sure having that “Dr.” in front of his name helped it to catch on! I’m not sure it would have the same effect coming from little ol’ me!)!

I say, essentially, attachment parenting is parenting with your heart. It’s not rocket science. If it feels wrong to you, it probably feels wrong to your baby too. The difference is that you have learned to cope with this cruel world and realize that not everything that is painful is bad, babies don’t have that sense yet.

A wise lady once told me that young babies don’t even realize they are a separate entity (realistically, we don’t know this for SURE. We aren’t in a baby’s head, but it makes sense, so hear me out…). They’ve been a part of you for 40 weeks (give or take) and just because they are not inside of you anymore doesn’t mean they don’t depend on you for everything – including their emotional well being and comfort. They were literally IN you, safe, secure and cozied up for nine months. Suddenly, they are in this bright, noisy world and are often expected to conform. I suggest that maybe we should try to conform to them and ease them into our world gently.

I held my newborns a lot! A LOT! It felt like a lived on the couch for the first month. I co-slept with all of them for as long as I felt was necessary for that baby (and each one of mine was different). I breastfed (feed) on demand versus on a schedule. I was accused many, many times of spoiling my babies and even told “You made him this way, you know.” I made my baby need me? No, sorry. They are born that way. And, they NEED us for a short time in the whole scheme of life. 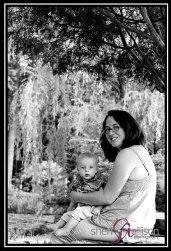 Don’t get me wrong. Having a newborn is HARD HARD HARD! Lack of sleep does horrible things to your psyche and can push your already hormone laden body over the edge into depression. I DO think we are given the task of teaching our babies to live and thrive in this world, I am just not convinced they should be “taught” (and I am not convinced you CAN teach a newborn to sleep on your schedule anyway) those first few months (few, in my world, is 4-6 months typically depending on the baby). Their world, as they knew it, has been shaken enough. Building trust and a mutual respect just seems logical to me if you want your baby to eventually be secure enough to know you will be there for them when they really do need you. Secure enough to sleep alone, knowing if they get hungry, thirsty, have a nightmare,…. you will come to the rescue.

Yes, I whined and complained that I was exhausted those first months. It got me looks and words of sympathy that helped me push through. And, it made me feel a little better to get it out. I also won’t claim that my babies never cried when I put them in bed (Isaac is going through a phase right now where he’s too busy to nurse to sleep, but also too busy to let me rock him. I don’t like it, but he’s pretty miserable when he doesn’t nap, so sleep is a necessity. So, at 7 months, he’ll occasionally need to cry about 10 minutes to settle himself down to sleep despite my best efforts to avoid this. But, there’s a vast difference between 7 months and 7 weeks).

The bottom line is that sure I missed a lot of sleep and wore down my couch cushions a lot those first few months with a new baby (with all four of mine). But, in the long run, those first months of lost sleep and tired arms didn’t really matter. Eventually, my babies slept. Eventually, they sat on the floor and played on their own. Eventually, they ran away from me to go play with their friends. They may be spoiled now (the mounds and mounds of toys in their bedrooms are evidence of this), but it’s certainly not because I held them too much as babies, or because I rocked Micah to sleep for the first year of his life, or because I nursed my baby instead of eating a warm dinner.

Am I A Better Mom Than You?

The article that prompted this entry was titled “Are You Mom Enough”. It suggested that mommies are at war to prove they are the “most attached” to their babies. I don’t subscribe to motherhood being a competition. I do think there are benefits to attachment parenting, so I practice it as much as I can. My kids and I are FAR from perfect (my mom and anyone who has ever been to church with us can tell you my kids – maybe one in particular – can throw some royal, whiney fits). I don’t think there is a one size fits all way of parenting. Heck, each individual kid in my house needs different parenting. I don’t think that if you put your baby in a crib their first night home, you aren’t attached to your baby. I don’t think if breastfeeding didn’t work out for you, you aren’t attached to your baby. The only “requirement”, in my mind, is to follow your baby’s lead and be there for your baby. It’s not a contest, it’s a baby – your baby. Love, protect, cherish and RESPECT them for the beautiful, perfect new little person they are and you can’t go wrong.