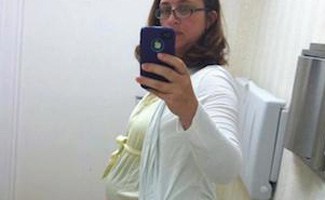 If you have been following my surrogate journey, you know I last announced that I was pregnant! My last blood test fell when my in-laws were at our house preparing to help us move. My husband had been an associate priest at a church since graduation in 2011. He was recently offered a position at a church a few hours from where we had been living. So in the middle of all of the stress and “being careful”, we had to pack up the house and four kids and move. It was nice to have the help, especially since David had two mission trips planned within a month before we moved. But it meant our house was even more full and active than usual! The phone call about the results came later than usual, which worried me. Each time, even though the numbers had been great (138, 621, 3686), I was still a ball of nerves on “beta days”. I had read that a lot of Res will stop once you hit 10,000, so I was really hoping for that number. My cue that all was well was that my intended mother would call me. If the doctor called, it was bad news. When I saw her name pop on my caller id, I felt my whole body relax. She had “forgotten” to call and check! Is this the same person who had me call every place in an hour radius to see who could get the test results the fastest just a week earlier? The long awaited number was 10,114! We had made it over 10,000! The ultrasound to check viability was the next week.

By the day of the ultrasound, we just had moved. So, after days of packing, driving, and unpacking, I was off again for the now four hour drive to Atlanta for an ultrasound. Again, I was a ball of nerves. I felt so sick to my stomach! The technician explained that she would turn the screen toward her to get her measurements and then flip it around for all of us to see (my intended parents and me). What this really translated to was, “I need to see a heartbeat before I let you see the screen…” because as soon as she started, she said, “There’s a heartbeat!” and flipped that screen around! I grabbed for Intended Mothers’s hand instinctively, while she told Intended Father, who had been standing back, to come closer to see! There were tears in everyone’s of eyes! Once you see a heartbeat, the rate of miscarriage drops to under 4%. They aren’t a fan of percentages. They had been on the bad side of all odds before, but I knew that this meant our chances were great, that all would be well and this little bean would be making an appearance some time in late February or early March!

Always Something to Worry About

Other than some serious cramping that scared the crap out of me, the next few weeks went by without a hitch. Each ultrasound allowed my Intended Mother to breathe a little easier. She kept saying, “I’ll feel better…”, but I could still feel her nerves. I knew that once we had made it past those first 10 weeks or so, chances are we would be fine. Usual chromosome issues that cause miscarriage usually do so very early on, so I wasn’t as worried as she was. However, to say that every cramp didn’t scare me would be lying.

I found I worried so much more with this pregnancy than with my own. At 10 weeks, I purchased a Doppler to listen to the baby’s heartbeat. I’ve done a lot of research and there’s no true evidence that ultrasound waves in small amounts (and Doppler’s give off such tiny amounts) cause any issues with the fetus. However, my Intended Parents found an article that implied there might be a possible correlation between ultrasound waves and autism and it scared them enough to ask me not to use it. If it made them nervous, I was happy to agree not to use it after the first, and only, time I tried it. So much for easing my mind!

At 12 weeks, we had our “first trimester” screening. I’d never done this with my own children. We were ready to face whatever we were given, so I didn’t bother with the tests with my own. With someone else’s baby though, you have to do what they want done rather than what you would normally choose to do. The blood work and the scan were awesome and baby was given a 1:10,000 chance of having no chromosome disorders or Spina Bifida. They were very reassuring results and my Intended Parents decided it was time to tell their families! It was really exciting to finally see them (her, in particular) relax a little bit more! We still had a ways to go, but all signs pointed to us getting there!

At almost 15 weeks, we had an ultrasound that determined that the baby was most likely a girl! I was certain, I’ve seen many a boy ultrasound, and this was no boy! They weren’t sold though because it was so early. At 19.5 weeks, it was confirmed that this baby was, in fact, a girl! The irony was not lost on me, at all! I have 4 boys and when it’s someone else’s genetics, I am finally carrying a girl! The myth about morning sickness being worse with girls was not true for me. The myth that heart rates are faster with girls was not true (it was about the same as with 3 of my 4 boys). The myth that you carry girls differently than boys was not true for me. Basically, it was just like my other pregnancies! But, it is fun to be carrying a girl for the first time and I still have no desire what so ever to take this little girl home with me! My boys are plenty for me, thank you very much!

I am now almost 28 weeks along with this miracle baby girl. She has a name (which I can’t share) and has a definite personality! She’s not nearly as active as my boys (the main difference), but she certainly makes her presence known and she gets the hiccups more often than all of my boys combined! I can’t wait 11 more weeks until we see her precious little face and the faces of my Intended Parents when they see her for the first time. It’s surreal how close it is now! Time is flying, so I know February 2014 will be here before we know it and she’ll be in their arms.

This process has been both more stressful than I ever could have imagined, but also more rewarding and meaningful to me too. It has been such a blessing to know that I am growing a person for another family to raise. A family that, without me, wouldn’t have had this chance. That feels pretty amazing. I will update once the baby is here and my emotions are all sorted out, but I’ll leave off with this quote that I love regarding surrogacy: “I make families! What’s your super power?”