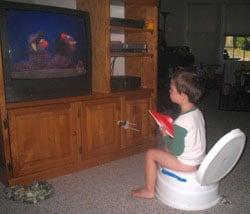 Although I am not currently potty training, I have (with lots of help!) successfully potty trained 3 little boys. Several friends have recently asked for breastfeeding advice for their little boys, so I thought I’d give a few pieces of potty training tips that may (or may not) help other parents going through it. I will admit we had a lot of help potty training our middle two boys, Micah and Elijah. I was working full-time when they were potty trained, so others played a large roll, but I can still give tips based on what we did and what they did. It does, however, involve some bribing, so don’t necessarily take great parenting notes from this one, BUT bottom line, it was temporary and it worked!

I bought Jonathan a potty seat when he was about 18 months. He had been walking for a while, but wasn’t talking yet, so I really didn’t have high hopes. But, I wanted him to know what a potty was and to be comfortable sitting on it.

You have to know your kid to know if this will work. I realize Isaac is only 14 months, but I suspect he’d climb in, on and around a potty seat, but not sit on it. He just isn’t that type of kid. Maybe he will be ready to try it out in 4 months, but he is just MUCH more active and adventurous, so I’m not certain he will.

For Jonathan, however, it was the right move. He’d watch tv on it in the family room, he’d look at books on it, and, yes, he’d sometimes climb in it. He did not seem to understand that he was supposed to actually pee on it, but it was a start.

The “getting used to the potty” lasted for a while. A long while. I didn’t figure it was worth the effort to try to start true potty training until he had actually used the potty for what it was meant for. Everything I had read said boys were typically ready around 3 years of age, so I didn’t push the issue. He would let me know when he was ready to move it to the next level and he really wasn’t showing any signs. Besides, he was a late talker, so I was worried about how he’d express that he needed to go potty since he didn’t have many words yet (this was just before he turned two). But, one day while watching television, I heard the tell-tale dribble, dribble and he jumped up (mid stream! Oops!) and looked into his potty and yelled, “Water! I made water in my potty!” Ha! We did a happy potty dance and never looked back! He was just about 2.5. He had ONE accident after that. He’s the type of kid who didn’t like to be messy (That has changed, but was true back then!), so peeing down his leg one time when he had on underwear was all it took to get the message that diapers were no more. He slept in a diaper for about a month, but was consistently waking up dry. So, even nighttime diapers were gone before three years old! A good thing since, by then, we had two in diapers!

A Time for Trying

With Micah, we used cloth diapers for a while. I didn’t have very many and the ones I had often leaked, so we switched back and forth a lot and I gave up all together by the time he was one. I have learned a lot since then and I think he would have been an easier kid to potty train had we stuck with it. But, it is what it is and he ended up being my latest trainer. It just goes to show you that you can do the exact same thing that worked with one kid on another and have totally different results! Every child is unique and his (her) own person. Micah happens to be a VERY strong-willed little person! If it can’t be his way, you will meet loads of resistance. He is smart as a whip, so he occasionally (okay, often) will use this to try to get his way. This was true with potty training. Until he decided it was HIS time, he was not doing it. We let him pick out his own underwear; that didn’t work. We let him choose his own potty seat; that didn’t work. We even tried bribing with him (something I didn’t even remotely consider with Jonathan! To him, a graham cracker was a treat. Candy never crossed my mind! Oh how things change by child number 3, much less child number 4!) ; even that didn’t work. I had really, really been hoping to have him potty trained before baby number three was born. Micah, however, had other ideas. He wasn’t ready at 3 (he was 3 years, 6 weeks when Micah was born). We tried about once a month to do the 3 days hard-core training (cold turkey, no diapers allowed… Otherwise known as “potty boot camp” in our house!), but it was met with screaming, yelling, stomping tantrums… Usually about half way through day 1, I would give up. He clearly wasn’t emotionally ready. I did some reading about boys and potty training resistance. LOTS of reading. Everything I read said 3.5 was pretty average for boys. He would get there, eventually… I hoped… I prayed!

I was working full-time during this time period. When I went back to work after Elijah was born (at 10 weeks), the boys started at a new babysitter because we couldn’t afford three kids in a daycare center. Plus, I didn’t really want my newborn being cared for in a center. I had worked in one and knew the babies weren’t held nearly enough. We found a home daycare and there happened to be a little boy there who was about 5 months older than Micah. Jonathan was a lot older. He was a big boy. He SHOULD use the potty. But, until Micah met that little boy, I don’t think he minded being a baby. He had been “replaced” as the baby by Elijah, so he was holding onto what he could of being a baby, his diapers. When he saw another little boy his age using the potty, I think it triggered that “I want to be a big boy too!” complex!

Lo and behold, when he was around 3.5, I picked up Micah one day and got the announcement that Micah had peed in the potty. Not just once. Not just twice. ALL DAY LONG!!! You know, that child NEVER had an accident. He refused diapers at night from day one (he weaned himself from his pacifier cold turkey too!) and has never once wet the bed. So, there is something to be said for just following their lead! There are advantages. Not changing pee stained sheets in the middle of the night is a HUGE advantage in my book!!!

By the time Elijah got to potty training age, I had relaxed a lot about the whole “process”. We pulled out the Dora the Explorer potty chair Micah had chosen when he was 2 (and never used, not even once) and let him sit on it before bath time around the time he was 20 months (give or take, I can’t remember). True to my previous experiences, he never used it. But, unlike Micah, he didn’t scream. So, I went with it. It became a routine (I would have done it in the morning too, but Daddy got them up, fed, dressed and out the door to school. Could I REALLY ask him to do more than that???).

Now, to be honest, I can’t take ANY credit beyond getting him used to the potty in the potty training process of Elijah. My husband was in graduate school at the time when he was potty learning, so the boys went to a preschool affiliated with the school my husband attended. Unfortunately, the preschool was closed for the summer while David still had a summer internship he had to complete. His brother, James, agreed to come stay with us for the summer, but had a prior commitment at the beginning of the summer. So, my mother in law came to stay with us for a few weeks at the onset of the summer. Elijah had finally made some progress with peeing in the little potty before bath time, so I asked my mother in law if I got him started on the weekend, would she keep up the progress during the week. She was more than willing! And, boy did she have more luck than I did!!! 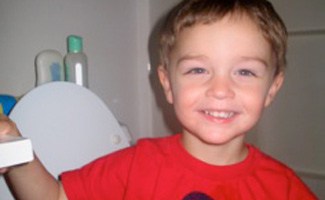 On the weekend, we had accident after accident after accident. I was so tired of cleaning up pee that I was ready to throw in the towel. When I got home from work on Monday, however, only ONE accident! WHAT???? “What did you do differently?” I asked her. One simple word, gum!!! My 2-year-old had never had gum in his life. However, I did know he was a candy lover! He would do anything for a coveted piece of candy! We found him several times standing on the kitchen table to get into a basket of candy we kept out of reach on a shelf! I should have known bribery with candy would work on this child!

Admittedly, he did take a bit longer than my other two (I think maybe he was holding out because he knew the candy would stop once he was consistent!) and he is the only one who has had accidents relatively frequently (well, they aren’t frequent anymore, but still occasional). But, it was DONE! We were diaper free for a blissful 1.5 years before Isaac was born!!!

So, this mish mash of personalities all under my roof gave me a little bit of insight into the world of potty training tips:

What Potty Training Tips Do You Have?

As a mom, we are sure you have lots of potty training tips that you can share too. And since every kid is different, all your tips and stories will be helpful for other readers. So please, leave a comment below with your potty training tips.

New comments are closed at this time.